Fresh from the printer

The most recent publications from the department 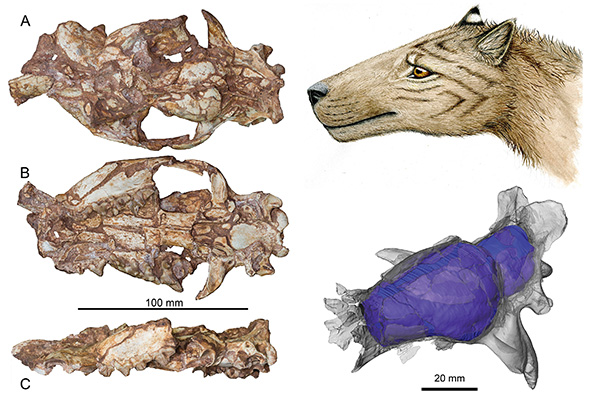 Hyaenodonts were carnivorous mammals that were once widespread, but which went extinct in the Miocene (23.5–5.2 million years ago). Since they don’t have any living descendants little is known about what their brain looked like apart from what we can glean from casts of the brain cavity of a small number of species. In this study we describe a new species of hyaenodont and use x-ray microtomography to reconstruct its braincase. We then compare the cast of this braincase with those of other hyaenodonts to better understand how the brain changed through time in these animals. In both of the major groups within Hyaenodonta we see a similar trend of an increasingly folded brain, as well as a more expanded neocortex, the part of the brain responsible for, among other things, cognition. 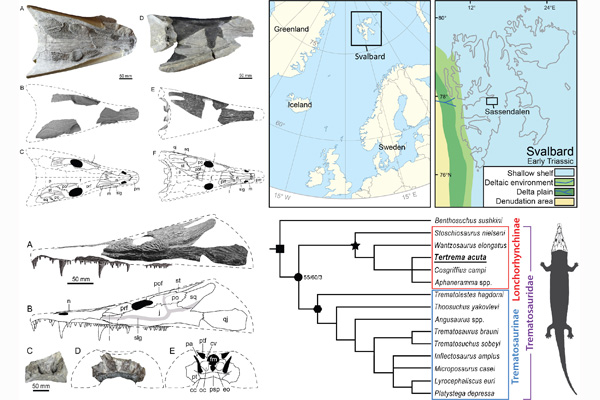 Trematosaurids were large and globally distributed Early Triassic amphibians with elongate ‘crocodile-like’ skulls. Some of the most famous fossils of this group were discovered on the island of Spitsbergen in the Arctic Svalbard archipelago by the Swedish palaeontologist Carl Wiman in the 1900s. Among these, the short-snouted trematosaurine, Tertrema acuta, is one of the few fossils represented by nearly complete remains of the skull. In our paper, we re-assessed these fossils to analyse the evolutionary relationships within the extinct trematosaurid amphibian group and provided a new taxonomic description (diagnosis) for T. acuta. Unexpectedly, our results differed markedly from previous literature-sourced interpretations which formerly placed T. acuta within the short-snouted Trematosaurinae and instead puts the species amongst the long-snouted group, lonchorhynchinae. Thus, our results challenge the long-favoured sub-division of trematosaurids based on their skull shape and suggest that the evolutionary pathways may have been more complex than the traditional classification had proposed. 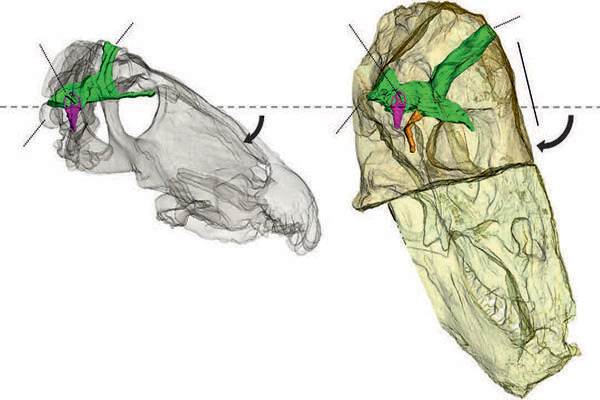 Dinocephalians (Therapsida), some of the earliest amniotes to have evolved large body size, include the carnivorous Anteosauria and mostly herbivorous Tapinocephalia. Whilst the palaeoneurology of the Tapinocephalia has been investigated in Moschognathus whaitsi, that of the Anteosauria remains completely unknown. We used X-ray micro-Computed Tomography to study, for the first time, the palaeoneurology of Anteosaurus magnificus. Compared to Moschognathus, we reconstruct Anteosaurus as an agile terrestrial predator based on the enlarged fossa for the floccular lobe of the cerebellum and semicircular canals of the inner ear. A major difference between the two genera resides in the orientation of the braincase, as indicated by the angle between the long axis of the skull and the plane of the lateral semicircular canal. This angle is 25° in Anteosaurus, whereas it is 65° in Moschognathus, which suggests that the braincase of the latter was remodelled as an adaptation to head-butting. 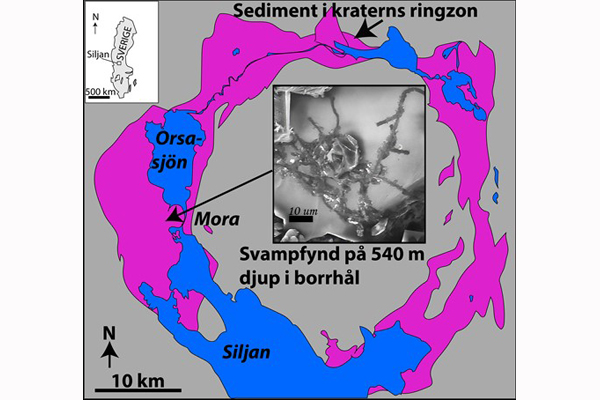 A fossil microbial consortium composed of anaerobic fungi and methanogens is described in drill cores of 540 meters depths, and an age of 39 Ma, from the Siljan impact crater. The microbes existed at strict anoxic conditions deep in the bedrock where they produced methane. The anaerobic fungi decomposed oil that are migrating in the crater´s fracture system, and in the process, H2 was produced, which the H2-dependent methanogens used to produce the greenhouse gas methane. Our study show that the crater was inhabited still 300 million years after the actual impact, and probably still is. 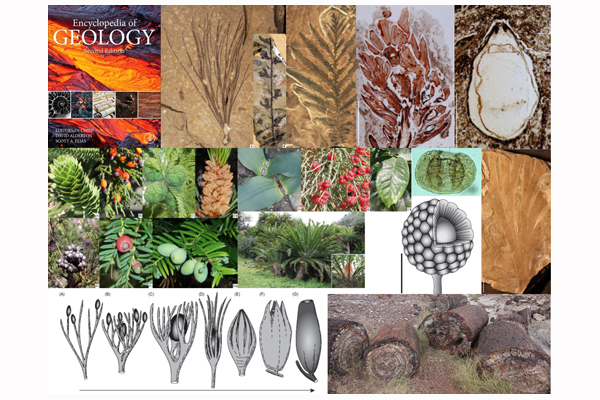 This article summarizes the diversity of living and extinct gymnosperms or “naked seed-bearing” plants. It provides an introduction to the classification of gymnosperms, their origin and early radiation, and the evolution of key diagnostic characters, such as seeds and pollen. The major orders of gymnosperms are summarized and illustrated in terms of their foliar, wood and reproductive characteristics and their stratigraphic and geographic distribution. The controversy over the relationships between the various gymnosperm orders is outlined in a series of simplified phylogenetic trees. The appearance of key characters is plotted on a chart showing the ranges of the major groups through the geological record. Finally, the economic significance of gymnosperms is outlined—from their importance as timber and paper pulp resources to applications in medicine, foodstuffs and flavourings, and to uses within industry as varnishes, cosmetics, gums, and perfume. The role of gymnosperms as allergens and toxins in the environment is also noted. This is a contribution to the book Encyclopedia of Geology, 2nd Edition. 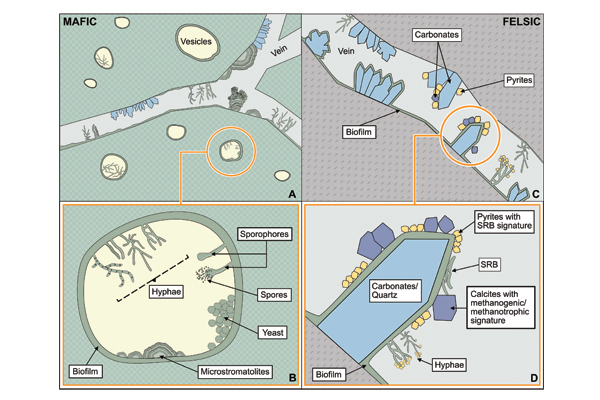 Paleontology is based on fossils found in sedimentary rocks. Research at the Swedish Museum of Natural History has during the last decade shown that fossils also are found in igneous rock. Such fossils are the fossil record of the deep biosphere. The deep biosphere is today the second largest reservoir of live biomass and prior to plants colonized land the deep biosphere was the largest reservoir of live biomass. This suggests that the deep biosphere played an unrecognized role in the evolution of prokaryotes and eukaryotes. Here, we review the current knowledge of the fossil record of igneous rock, and show that this area of research needs more attention and research in the future for us to fully understand the early development of life. 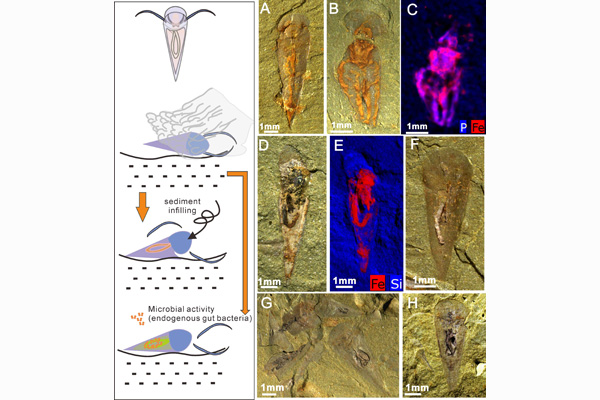 Remarkably preserved hyolithids with helens and interior soft tissues are reported from the Guanshan Biota (Cambrian, Stage 4) of Shijiangjun section, in Yunnan Province of South China. Extraordinary soft parts preserved in these hyolithids include muscle scars and digestive tracts. Three types of soft part preservation modes are described from the collection: (1) preservation through pyritization, (2) sediment-infilling of guts, and (3) bacterial biofilm pseudomorphs, resulting from endogenous bacterial decay. By comparison with younger hyolithid specimens, the newly collected materials indicate that the gut anatomy of hyolithids was evolutionarily conservative from the early Cambrian through to at least the Ordovician. 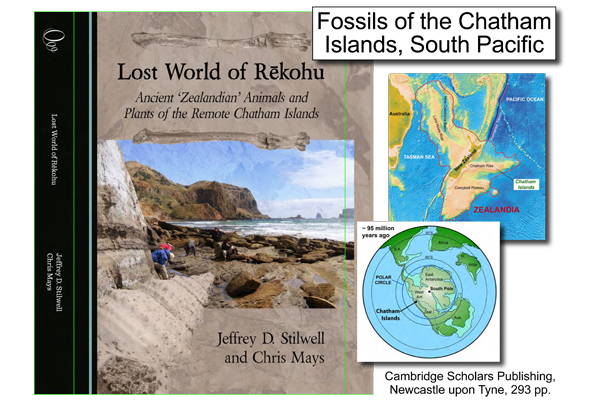 From the south polar forests of the mid-Cretaceous (95 million years ago) to the subtropical seas of the Pliocene (4 million years ago), the fossils of the windswept Chatham Islands reveal vivid panoramas of our changing world, and the plants and animals that have inhabited it. The history of fossil exploration on the islands is presented, from the first scientific expeditions of the mid-1800’s to the cutting-edge and profound scientific discoveries of the present. Finally, the book provides an up-to-date overview of the conservation efforts to save some of the world’s rarest animals and plants on this remote volcanic archipelago. 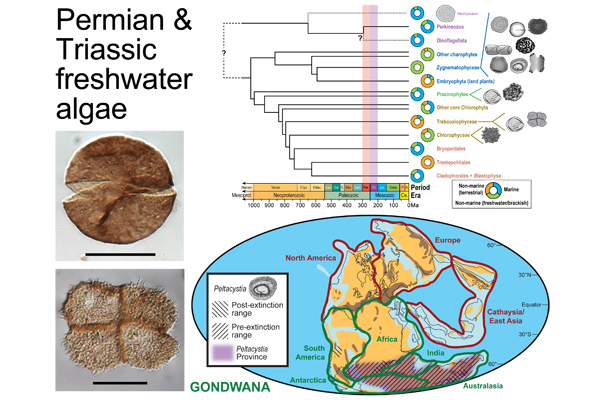 The Permian–Triassic was an interval of nearly 100 million years (299–201 Ma), and included five global mass extinction events, including the largest of all time: the end-Permian event (252.2 Ma). We outline the abundance and distribution changes that these extinction events had on freshwater algae. We identified a distinct province of freshwater algae that stretched across much of Gondwana for most of the Permian, but came to an end at the end-Permian event, along with collapse of the wetland forest biome. Finally, we lay the groundwork for interpreting specific environmental changes from algal abundances, particularly during extinction events. 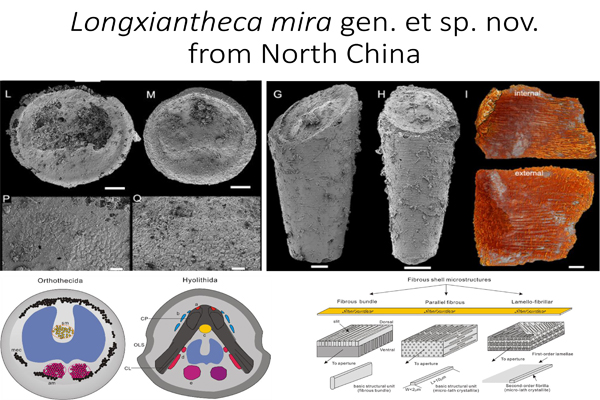 We describe a new orthothecid hyolith from the early Cambrian of North China (ca 515 million years ago). The new species, Longxiantheca mira, represent one of the most primitive orthothecids known and has a straight cone-shaped shell and a simple disc-like operculum. However, the new specimens preserve imprints of the soft anatomy of the animal and the microscopic structure of the shell. The new finds show that all hyoliths are closely comparable in their soft body anatomy and that the shell of the earliest hyoliths is closely comparable with that of early molluscs, indicating that the groups are closely related.