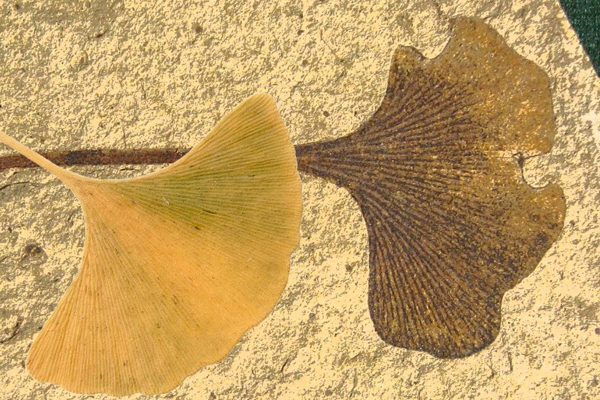 The research project GLOBAL GINKGO’s overall aim is to improve the stomatal proxy method of CO2 reconstruction using Ginkgo biloba (ginkgo) – arguably the most important plant species on Earth for palaeo-climate research focusing on the relationship between climate and atmospheric concentrations of CO2.

CO2 is a principal atmospheric greenhouse gas that has increased >35% in concentration at an unprecedented rate during the last hundred years, due mainly to human activity. It is predicted to increase further and result in temperature increases of up to 4°C by the year 2100 (IPPC report 2015), with severe socioeconomic and ecosystems impacts predicted. Reducing uncertainty in predictions of future climate change is one of today’s greatest scientific challenges, with many significant questions left unanswered. For example, the exact relationship between CO2 and temperature – the so-called climate sensitivity – remains poorly constrained. A key question here is whether climate sensitivity is “state dependent” – that is, different in warmer vs colder background climates.

Stomata are pores on plant leaf surfaces, through which gas exchange takes place, i.e. carbon is acquired for photosynthesis from CO2 and water vapour and oxygen is lost by diffusion. An inverse relationship exists between the density of stomata (SD) and CO2, due to plants aiming to preserve water by reducing the density of stomata when CO2 is abundantly available. The inverse relationship can be used to reconstruct CO2 concentrations in the past, using fossil leaves – this is called the stomatal proxy. 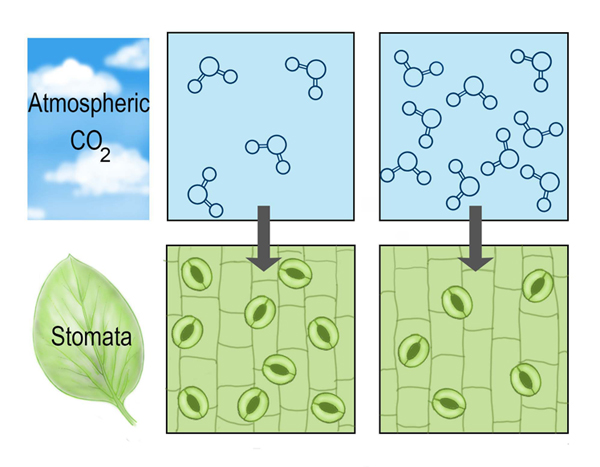 Ginkgo as a group has shown a remarkable evolutionary stability, with close relatives found abundantly in the fossil record as far back as the Permian (ca. 270 million years ago), making it an ideal plant to use in stomatal proxy-based CO2-reconstructions. Today, Ginkgo biloba – the sole living representative of the previously more diverse taxon – is abundant globally, growing on all continents except for Antarctica. In order to refine the ginkgo stomatal proxy, it needs to be better understood whether additional environmental factors, apart from CO2, significantly affect SD of living – and therefore presumably fossil – ginkgos. 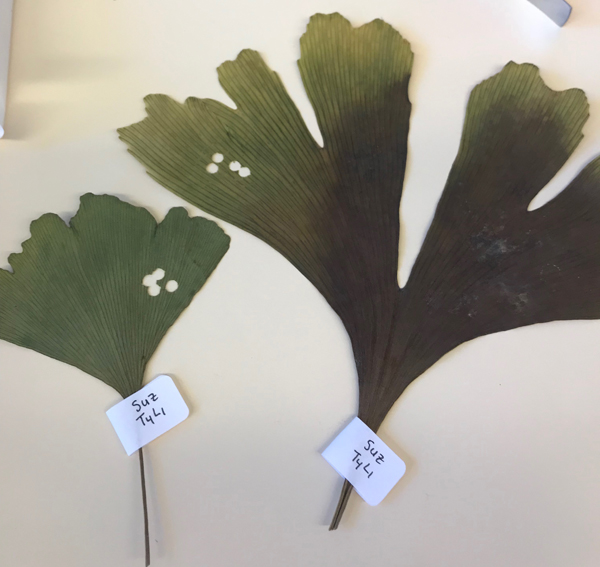 Leaf processing – two Chinese ginkgo leaves that have been photographed, weighed, tagged, and sampled for isotope analysis. Next step is macerating a 1x1 cm2 square of each leaf in acid, to separate the cuticle from the soft tissue, stain and permanently mount the cuticles on thin slides, for microscope analysis.

Project GLOBAL GINKGO is testing the stability of stomatal densities of the living Ginkgo biloba growing under known CO2, but in different temperature and precipitation regimes. To this end, we have in 2017-2018, in an ongoing “citizen scientist” assisted effort, collected almost a thousand leaves from ca.150 trees growing in more than fifteen countries across four continents in both hemispheres, ranging in climate zones from temperate-boreal (e.g. Stockholm) to borderline tropical (e.g. Lahore, Pakistan). The Earth is thus utilised as an “experimental chamber”, with controlled - or more accurately – measured, global CO2, but varying natural environmental regimes. 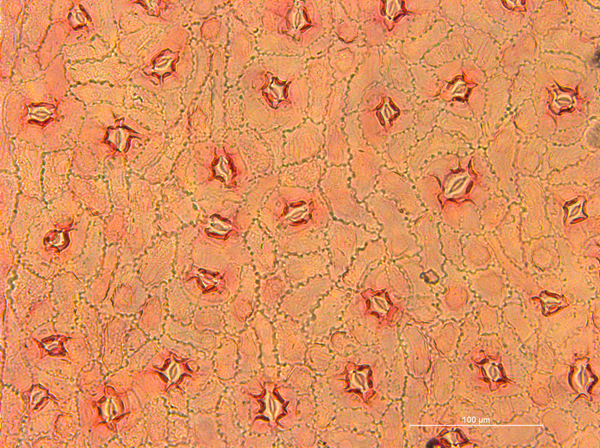 Ginkgo leaf cuticle at 200 times magnification. Stomata and epidermal cells are clearly visible. Stomatal density, and the size and shape of all cells are measured for every leaf in the database.

This research is funded by the Swedish Research Council (VR): Starting grant NT7-2016 04905

Institute of Geology and Palaeontology, University of Münster, Germany 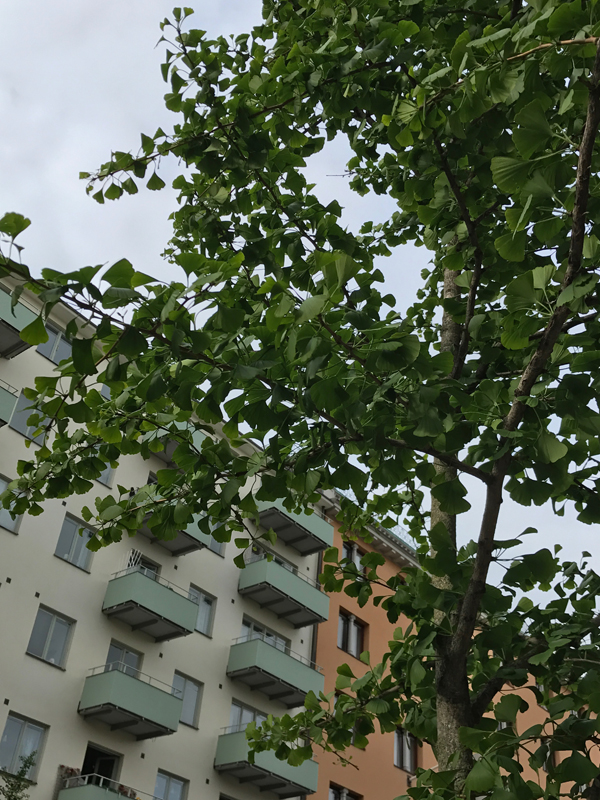 Leaves have been collected from all over the world for the GLOBAL GINKO project – here one of many ginkgo trees lining the Stockholm street Hornsgatan. 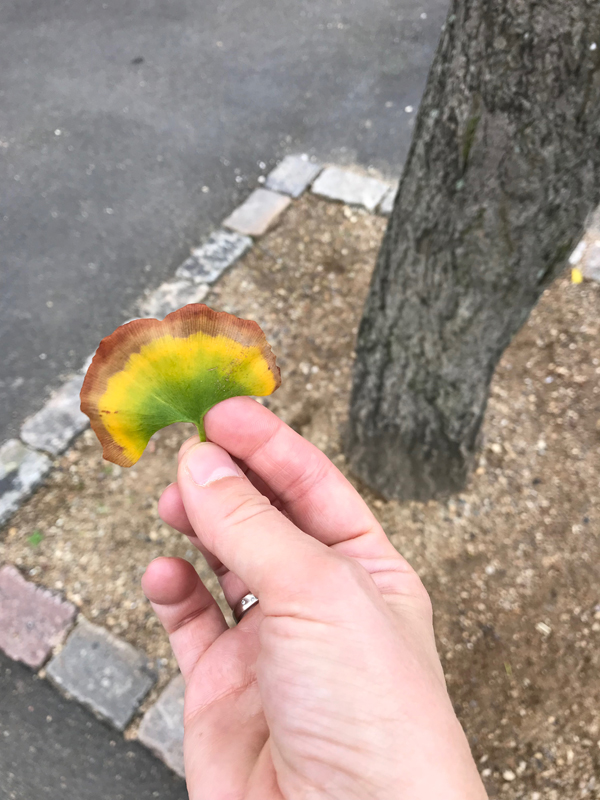