An important fossil flora occurs in a disused quarry at the end of Haig Street, Brassal, located 4 km northwest of Ipswich city centre, southeast Queensland. Formerly a sand and gravel quarry, this site was handed to the City of Ipswich in 1989 and converted into an open eucalypt forest reserve and environmental park — the Haig Street Quarry Bushland Reserve.

Two rock units are exposed within the reserve. The Tivoli Formation (Late Triassic: Norian) is exposed on the eastern wall of the quarry and contains a rich fossil flora. The Aberdare Conglomerate (latest Triassic to earliest Jurassic) is exposed on the western fringe of the quarry and its fossils are mainly restricted to impressions of large logs. The site is located close to the West Ipswich Fault forming the western margin of the Ipswich Basin, and extensive movement along this fault has caused strata in the quarry to be tilted at a high angle. Dip slopes of beds in the eastern wall of the quarry host an array of leaf impressions and compressions and, in a few places, weakly silicified-ferruginized logs.

The fossil flora of the Tivoli Formation at this site is somewhat atypical of Norian assemblages elsewhere in the Ipswich Basin in being dominated by leaves of voltzialean conifers (Heidiphyllum), Petriellales (Rhochipteris), Ginkgoales (Ginkgoites) and Matatiellales (Dejerseya). Elsewhere in the Ipswich Basin, Norian floras are overwhelmingly dominated by Corystospermaceae foliage (Dicroidium). The Tivoli Formation at Haig Street Quarry is dominated by conglomeratic facies typical of alluvial fans, and its location near the basin margin suggests that the fossil assemblages may incorporate many elements typical of the extra-basinal upland flora. Elsewhere in the basin, the fossil-rich Tivoli Formation and overlying Blackstone formations are dominated by finer grained sedimentary facies including several coal seams, and the corystosperm-dominated assemblages at those sites probably reflect lowland mire, lake-margin and riparian plant communities.

Fossil collecting is no longer permitted in the reserve. The Swedish Natural History Museum has a modest collection of fossil plants from this site recovered during the 1980s by Stephen McLoughlin. The full catalogue of fossils recovered from the site, together with images of selected specimens are listed on the links above. 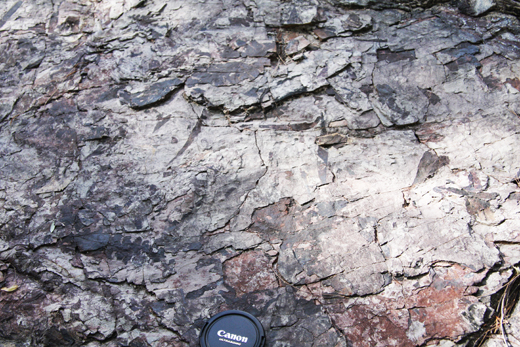 Map of Australia showing the distribution of Triassic sedimentary basins (yellow) including the Ipswich Basin (red), click for larger image. 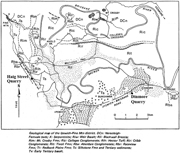