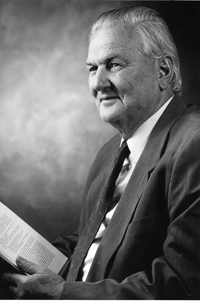 Professor Hans-Joachim Schweitzer died of cancer on the 20th of July, 2007. He was a paleobotanist who spent a large part of his life studying fossil plant assemblages around the world that provided key windows into the evolution of the history of plant life on Earth. A brief outline of his life is charted below.

Hans-Joachim Schweitzer was born and raised in Kassel, a city in Hessen, west central Germany, where his father was a bank clerk. His father transferred an interest in nature to Hans-Joachim at an early age. As a seven-year-old, Hans-Joachim began to collect butterflies and plants. His interest in living plants influenced him for the rest of his life. His childhood and youth were disrupted by the political and social changes wrought by the rise to power of the National Socialist Party in the 1930s and 40s. The Schweitzer family suffered deprivations and increased scrutiny owing to their opposing political stance. In 1943, at the age of 15, he was forced to serve as an aide in the anti-aircraft artillery, hence the final four years of high school were lost. Schweitzer attained a glider licence and took the entry test for officers in the army. In 1945, at the age of 17, he was commanded to take part in the final battles against the US Army in the Harz Mountains. To evade captivity, he trekked cross-country from the Harz Mountains to Kassel where he discovered his home and herbarium collections destroyed by bombing. Immediately following the war, Schweitzer worked as a handyman on construction sites, returned to school, and finally achieved his high-school diploma.

From 1947 to 1949 he trained as a substitute-pharmacist, then studied pharmacy atMarburgand FrankfurtUniversities between 1950 and 1953. In 1953, Schweitzer graduated in pharmacy (Staatsexamen) and in 1954, after working for one year, he became a licensed pharmacist (Approbation). However, while working as a pharmacist he began studying botany. Even before completing his pharmacy degree inFrankfurt , Schweitzer as a volunteer had taken over management of the fern collection at the Senckenberg Natural History Museum where he met Dr Richard Kräusel, a palaeobotanist of international reputation. Kräusel agreed to supervise Schweitzer´s doctoral thesis on “Wood anatomical studies of the history of Dipterocarpaceae". Kräusel had selected this exceedingly dry and sedating topic to “tone down his restless temper". Nevertheless, Schweitzer completed his doctorate in 1956, hence concluding his formal study of extant botany, which he had combined with chemistry and physics.

In 1954, the older generation of German palaeobotanists called for the preservation of palaeobotany as a research field within the nation´s universities. The group of W. Gothan, F. Kirchheimer, R. Kräusel, K. Mägdefrau, K. Oberste-Brink, S. Strugger, W. Thomson, H. Weyland, W. Zimmermann and R. Potonié argued that “...We do think that at least one university (in Germany) should have a chair and a Department of Palaeobotany which is not
Created just for one scholar, but which shouId be filled continuously. Only such a set-up could prevent the demise of palaeobotany as an academic discipline and hence ensure continuity of our science in Germany."

The plea was answered by Prof. Roland Brinkmann of the Department of Geology and Palaeontology at the UniversityofBonn where retired Professor P.W. Thomson was teaching and researching palaeobotany. When Kräusel recommended Schweitzer as a promising junior researcher, Brinkmann offered him a position as assistant. Schweitzer went to Bonn, declining a job offerfrom the chemical industry, where he had been offered work on stabilising agents for blood plasma. Schweitzer took the position inBonnwith the expectation that a Department of Palaeobotany would be created that would establish a base for his future teaching and research and the opportunity to develop the field of palaeobotany within Germany. After the sudden death of Thomson, Brinkmann entrusted Schweitzer with palaeobotanical matters in Bonn. Schweitzer obtained his lecturer qualification (Habilitation) in 1962 with a study of “The fertile cone of Pseudovoltzia liebeana and its relevance for conifer phylogeny". However, the opportunity to develop an independent department of palaeobotany disappeared after the retirement of Brinkmann, when preference was given to the emerging field of micropalaeontology. At this time, palaeobotany existed as an independent section within the Department of Palaeontology headed by Schweitzer.

In 1966, Schweitzer was appointed professor and "Wissenschaftlicher Rat" (scientific councillor), after which he remained a researcher and teacher at the UniversityofBonn until his retirement at age 65. During his career he maintained a full schedule of lectures and field excursions and was editor in chief of the palaeobotanical journal Palaeontographica Abteilung B for nearly 20 years. Following his retirement, Schweitzer continued to fully devote his life to palaeobotanical research. He published detailed systematic papers right up to his death.

Schweitzer´s primary interests were in fossil plants but most of his earliest papers (between 1953 and 1958) were on living plants, and he continued studies on extant floras throughout his career, undertaking several trips in the 1970s and 1980s specifically to study the flora of northern and western Poland with local colleagues. In several cases he combined studies of the modern flora with fieldtrips ostensibly aimed to study fossils. This resulted in, for example, papers on the modern flora of Svalbard,BearIslandand Jan Meyen in theArctic .

Schweitzer published 95 papers over a period of 54 years. His palaeobotanical studies spanned the entire temporal span of plant life on land. His publications are particularly appreciated for their detailed drawings and reconstructions of the fossil plants compiled by various scientific illustrators.

Between 1957 and 1962, he studied Late Permian floras from theLower Rhineregion. He studied both permineralized and adpressed plant macrofossils in these assemblages together fossil spores and pollen in collaboration with Professor R. Potonié and Dr H. Grebe.

Soon after working on the Permian floras, a Middle Devonian flora was discovered in a quarry at Lindlar in theEifelregion. Schweitzer immediately purchased the quarry to prevent destruction of the fossil material and paid the quarry workers to collect the rare and enigmatic plants from this early terrestrial flora. Five key papers ensued from the study of this flora (from 1966 to 2008) including description of plants that illustrate the development of early leaves and the transition from herbaceous plants to the first trees. He simultaneously carried out research on another Middle Devonian flora at Wuppertal with Professor H. Weyland resulting in another four papers.

Schweitzer also maintained a lasting interest in the Early Devonian floras of theLower Rhineregion. Studies of these floras, with the help of his family and local collectors, allowed him to document the alternation of generations and developmental stages in some of the early land plants in this flora and enabled him to interpret the environment in which these plants grew.

Apart from work on the Devonian floras, Schweitzer also took an interest in the wealth of mid-Cenozoic plant fossils preserved in the Rhenian brown coal deposits. He collected material from these deposits for over ten years but, unfortunately, much of the material was lost in 1970 due to a “clean-up" of the Bonn department while Schweitzer was away. Part of the fruit and seed collection was recovered and is now housed in the SwedishNaturalHistoryMuseum.

Between 1961 and 1970, and again in 1990, Schweitzer undertook seven expeditions to Spitzbergen andBearIslandin theArctic . Such large volumes of fossils were recovered that only half the material could be stored in Bonn. Some was sent to theFuhlrottMuseumin Wuppertal, while other material was stored at his house. From the 1960s, Schweitzer published a series of papers describing the content of the Spitzbergen and Bear Island Devonian (Gedinian to Givetian) floras and he published a monographic overview of the floras in 1999. He elaborated on his studies of the world´s Devonian floras with publication of a large monograph on the Middle Devonian floras of south China with C. Cai.

The Arctic expeditions were ambitious field programs, undertaken in the early years without radio contact, and with only small wooden rowboats or a rubber dinghy with small outboard motor to navigate the coastal waters of Spitzbergen. He and his companions lived in tents and local huts, enduring wet and icy conditions while amassing their large collections of fossils.

While much of Schweitzer´s attention focussed on the Devonian floras of the Arctic, he also published work on the Cenozoic conifers of Spitzbergen incorporating in his studies the collections held by the SwedishNaturalHistoryMuseum. He noted that the Arctic floras of the Paleogene had the signatures of warm-climate vegetation.

Schweitzer undertook expeditions toIranand Afghanistan in 1971, 1972 and 1975 that lasted several months. The large amount of fossils he collected was the subject of two dissertations that he supervised. Eleven key papers were published on these floras from 1977 to 2008. Some of the material collected came from remote and inaccessible localities, and due to subsequent political instability in the region, some of these sites are currently inaccessible to palaeobotanists. Schweitzer´s material represents the best representation of these fossil floras available to science and includes rare and previously undescribed elements, such as Irania hermaphroditica and Palissya oleschinskii that may play important roles in understanding seed-plant relationships.

Funding for scientific expeditions was always a problem. The Deutsche Forschungsgemeinschaft (German Research Council) generously supported his many expeditions and subsequent research. It was also thanks to the German Research Council that Schweitzer was able to maintain a degree of independence in Bonn and it is a credit to him that as an individual he was able to maximise his potential and aptitude for scientific research with limited funding, and become such an eminent scientist. Science played a major role in the Schweitzer family. Fossilised plants, rock specimens of varying shapes and sizes, drawings, books and papers filled the house throughout the childhood of his five children. Doris, his wife, not only tolerated a scientifically biased home, but also helped him in the documentation of many papers and publications, in addition to dealing with all family matters, while her husband was away on his numerous expeditions and field trips, often for many weeks at a time.