Schweitzer was concerned that his large collection of plant fossils should be kept together in a palaeobotanical research environment. Schweitzer´s collections include not only a large number of specimens but also many specimens of large size. He had accumulated material from the Arctic, China, Iran and Afghanistan plus German localities from the Rhenish Devonian, the Lower Rhine Permian, the Rhenish Cenozoic brown coals and elsewhere.

The Institut für Systematische Botanik at the Friedrich-Schiller University in Jena accepted the material based on their intention to establish a palaeobotanical department,  and the material was transported to Jena where it was stored in the herbarium. However, circumstances changed and the material could not adequately be curated in Jena, hence the collection was offered to the Swedish Natural History Museum in Stockholm. The bulk of the material was transferred to Stockholm in April 2007 where it now resides on the basis of a long term loan.

Despite Schweitzer´s meticulous studies of the material, the lack of a permanent home for the specimens meant that no formal reference numbers were given to any of the specimens whether published or not. Between mid-2007 and the end of 2008, the entire Schweitzer collection was unpacked from its transportation boxes, re-packed in individual trays, sorted according to age, locality and publication details, and given formal catalogue numbers (JE for Jena and Sch for Schweitzer).

Labels were printed for each specimen and the identification, age and locality details were entered into the collections database of the Paleobotany Department at the Swedish Natural History Museum. Details of the material are now available on the museum´s website together with photographs of representative specimens. Schweitzer´s collection is now available for study by scientists and researchers from around the world. 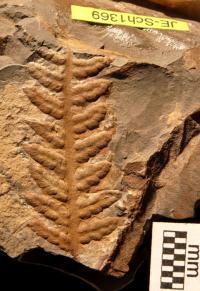