The Boola Boola (Rintoul Creek) flora
The Cretaceous is the longest period of the Phanerozoic Eon and saw dramatic environmental and biotic changes that set the scene for the development of our modern world. Australia has extensive sedimentary deposits of this age, and these host rich but geographically scattered assemblages of both terrestrial and marine fossils. The southern supercontinent, Gondwana, continued its fragmentation during the Cretaceous (Veevers 2000). Australia´s isolation initiated in the Middle Jurassic with rifting along the northern margin of the continent (Keep & Haig 2010). This rifting progressed in an anticlockwise fashion around the continent through the Cretaceous (Veevers et al. 1991), generating a series of rift and passive-margin sedimentary basins that today preserve an impressive record of Mesozoic animal and plant remains (together with significant resources of coal, oil and gas). The preserved fossils suggest that the fragmentation of eastern Gondwana had profound effects on biotic provincialism and subsequent development of insular floras and faunas in Australasia during the succeeding Cenozoic Era (Archer et al. 1994, McLoughlin 2001).

The Australian continent underwent rotation in the Cretaceous but remained at middle to high latitudes (Veevers et al. 1991), encompassing an area roughly equivalent to Europe. Extensive basins of fluvial sediments that had accumulated in Australia´s interior during the Jurassic, were flooded by vast shallow seaways during the Early Cretaceous (Valanginian—Albian: 140—100 million years ago). At their transgressive maxima, these marine incursions subdivided the continent into several discrete landmasses, and may have promoted allopatric speciation in the continental biota. The thick sheets of predominantly fine siliciclastic sediments deposited in these palaeoenvironments now form the seals for extensive aquifers (Dettmann et al. 1992), and preserve rich assemblages of coccoliths, radiolarians, foraminifera and palynomorphs that allow precise dating of the rock successions (Apthorpe 1979, Haig 1979, Morgan 1980, Helby et al. 1987, Shafik 1990, Howe et al. 2000). Such biostratigraphical studies have been particularly important for correlating strata within and beyond the Australasian region (Hollis 1997, Raine 2008) because volcanic materials suitable for radiometric dating are scarce and the long normal polarity signature (the Cretaceous Magnetic ‘Quiet Zone´) that characterizes the middle part of the period (McElhinny & Burek 1971) inhibits fine magnetostratigraphic resolution. 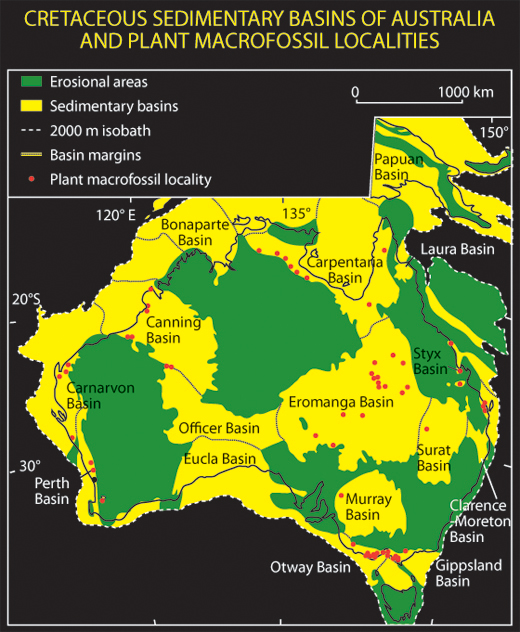 Helby, R., Morgan, R. and Partridge, A. D., 1987. A palynological zonation of the Australian Mesozoic. Association of Australasian Palaeontologists Memoir 4, 1-94.

McLoughlin, S., 2001. The breakup history of Gondwana and its impact on pre-Cenozoic floristic provincialism. Australian Journal of Botany 49, 271-300.