Morten Elmeros from the National Environmental Research Institute, Department for Wildlife Ecology and Biodiversity in Denmark, visited the Department of Contaminant Research at NRM for 5 weeks during autumn 2008. 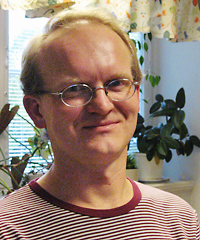 His aim of the Synthesys-project was to examine reproductive traits of otters (Lutra lutra) from different regions in Sweden, e.g. seasonal breeding patterns, reproductive rate and litter sizes.

Morten about the reason to visit the NRM as a visiting scientist:
"My Synthesys host, Anna Roos at the Department of Contaminant Research, and I have previously cooperated on determining the age of some of the otters collected at NRM. As a researcher at the National Environmental Research Institute in Denmark, I have been studying reproductive performances and population dynamics of otters in Denmark. TheSynthesysgrant made it possible to visit NRM and make comparable studies on otter populations in Sweden. The collection of otters at NRM is outstanding. Only a few European countries have comparably large collections of samples of otters covering such large areas and time span."

Morten about the visit:
"I got a very positive impression of the museum, the framework of the visit as a guest researcher and the people I met. It was very good to be able to live so close to the museum in the "Black villa". I had not been to Stockholm before, but I knew Sweden a bit from earlier holidays. Stockholm is an exciting and beautiful city – light and open in comparison with many other large cities. My Swedish was also a little better, and I got to taste fermented herring. The last you should taste several times, I heard."

The otter has a very large distribution range spanning the whole of Europe, northern Africa and most of Asia. It inhabits very different aquatic habitats from small mountainous streams and lakes to marine areas. Generally the otter has a low reproductive rate, i.e. the litter size is small and the females do not get cubs each year. However, the species has a very flexible breeding pattern as an adaptation to living in these contrasting habitats and under very variable climatic conditions. The breeding pattern in different populations varies in seasonality and timing from a strictly seasonal to a non-seasonal reproduction depending on the availability and predictability of food resources. Hence, different ecological conditions could affect breeding traits of otter living in northern and southern regions of Sweden. In this Synthesys -project, we examine the regional and temporal differences in reproductive patterns and rates among different regions of Sweden.

Only a few large-scale detailed studies have analysed breeding patterns and quantified reproductive rates by thorough examination of carcasses. NRM has an unique collection of otters systematically collected due to Statens Vilt regulations. As all dead otter carcasses should be sent to NRM, the number and distribution of carcasses reflects the distribution and development of the population in the wild.

In this project, we examined reproductive organs from adult females to quantify pregnancy rates and litter sizes. Timing of breeding season and birth is estimated by correlating the dates when the individuals were killed with estimated age of placental scars, estimated age of foetuses and dead cubs. Female reproductive performances are correlated with data on individual age, body condition, etc., which have been accumulated on the collected carcasses.

The data on reproductive performances of otters from different regions of Sweden will be compared to similar demographic variables in neighbouring populations to describe factors affecting reproductive timing and population recruitment in otter populations.

The otter is a very shy, elusive species, which primarily is nocturnal. Much of our knowledge on their ecology has been collected by examinations of carcasses. During the 1960ies and 1970ies otter populations declined throughout most of Europedue to exposure to persistent pollutant and habitat degradation. Persistent pollutants, e.g. PCBs, impaired reproduction and general health condition of otters. Pollutant levels have decreased since the 1980´ies and during the last 10 years otter populations have increased in Sweden and most other European countries.