Meteorites are extraterrestrial material that fall to Earth. The large majority of them are stones (94 %), the remainder are irons composed of iron-nickel metal and a small number are mixtures of stone and iron (the stony-iron meteorites). The meteorites originate from asteroids which through collision with each other were fragmented and thrown into Earth-crossing orbits. Comets may also be a source for meteorites, and some very rare types of meteorites are derived from the planet Mars or from the Moon.

Meteorites are uncommon. As an average, five new meteorites from falls are recorded globally each year. Shooting stars or meteors are very small meteorites consumed by melting and vaporization in the atmosphere.

Very large meteorites strike the Earth with cosmic velocity (more than 11 km/sec) and are vaporized in a cataclysm that may have global consequences. A well-known example is an impact in Mexico 65 million years ago that is considered to have caused the extinction of the dinosaurs. A Swedish example of a major impact is the 365 million years old circular Siljan structure. The lakes Siljan, Orsasjön, Skattungen and Oresjön mark the location of the structure.

Meteorites have characteristic properties which make them easy to identify by a specialist. All meteorites unaffected by weathering have a thin and well-defined black fusion crust formed by frictional heating in the atmosphere.

Iron meteorites have high densities and are strongly magnetic. Etching of a polished surface with a mixture of nitric acid in alcohol reveals a structure that is shown only by meteoritic iron and which is difficult to produce artificially. 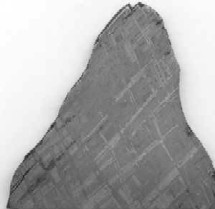 Chondrites have not been melted since their formation and are composed of almost the same proportion of elements as the Earth. They are believed to represent the materials the Earth formed from. The most primitive of all meteorites are the carbonaceous chondrites. Small amounts of organic compounds which formed in space without involvement of life are present in these meteorites.

Achondrites are stony meteorites without chondrules. They are divided into several groups that differ strongly from each other. The Mars meteorites make up three of these groups. 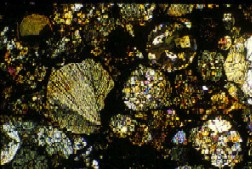 Stony meteorite. The photo, taken in a polarization microscope, shows a chondrite that fell in Hallingeberg in southern Sweden 1944. Rocks of this appearance do not form on Earth.
Photo: Erik Jonsson

The list of Swedish meteorites is short: nine falls and a handful of finds have been recovered during the last 130 years.

The most well-known Swedish stony meteorite, called Hessle after the place where it was seen to fall, exploded 1869 in the atmosphere and gave rise to a meteorite shower; hundreds of individual stones were recovered. The iron Muonionalusta also consists of many pieces. They represent fragments of a large meteorite that fell in northernmost Sweden more than 800.000 years ago. Glacial erosion during the Ice Age appears to have obliterated the impact crater. However, there are many rusty fragments of the iron meteorite in the moraine still waiting to be discovered.

The collections of the Department of Geosciences (formerly Department of Mineralogy) at the Swedish Museum of Natural History contain 1008 specimens from 307 different meteorites. Their name, type and country of origin are listed in a Meteorite catalogue that can be searched at Naturarv

(filter on "NRM Mineralogy" and "Meteorites").