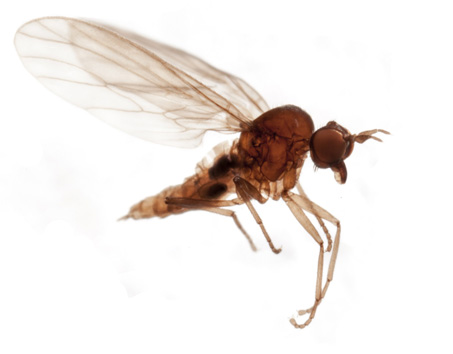 The Empidoidea constitute a species-rich superfamily within the flies (Diptera) and are mainly predators on other insects. Some are even important pollinators as they visit flowers for nectar. The superfamily is known from all parts of the world and comprises presently about 11500 described species. The group is characteristic in having a high degree of morphological variation among the various subgroups, much of which can be assigned to the predatorious behavious, involving hunting living insects. The superfamily is traditionally divided into four families: Atelestidae, Hybotidae, Dolichopodidae, and Empididae. Many of the flies in the various families are considered being dance flies, but this does not always follow the modern classification.

The knowledge about these flies in Sweden is relatively poor, particularly considering what species are present in the country, as well as the distribution of individual species. Work on the taxonomy of this group from other parts of the world demonstrates that the species diversity is much higher than previously known, even I so-called well-explored parts of the world. This project aims at increase the knowledge on the superfamily in Sweden. This will be done by applying various characters, like DNA and morphology, to revise the systematics as well as the taxonomy of the group. Important aspects will be to detect as many Swedish species as possible, and link these to distribution data. The results will be presented as taxonomic keys, species lists, species descriptions, as well as phylogenetic hypotheses. The material is gathered through own collecting as well as from the Swedish Malaise Trap Project.

This research is funded by the Swedish Taxonomy Initiative