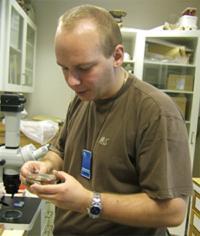 Sven Baier from the University of Frankfurt visited the department of Palaeozoology from 15  August to 6 September 2005, and was hosted by Elena Dunca.

The aim of Sven´s project was to examine and attempt to explain recent climate changes by analysing clamshells. Sweden has an especially good climate for his type of research since clams, like many other organisms, tend to live longer in colder climates. The oldest clam recorded within the project was 160 years old, an advance when studying processes ranging over hundreds of years.

Sven appreciated the Swedish climate and enjoyed his stay at the museum, especially the relaxed, kind and open attitude at the research department

Sven Baier
Institute for Geology and Palaeontology at the University of Frankfurt
Synthesys project number SE-TAF-915. 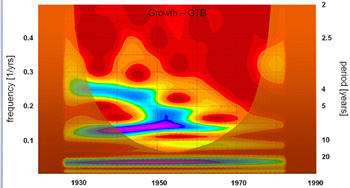 Long-lived freshwater bivalves function as ideal, multi-proxy climate archives. Variations in shell growth, shell oxygen and stable carbon isotopes reflect environmental conditions during the shell growth. In my study, we analyze shells of Margaritifera margaritifera (L.) (up to 160 years old) from northern Sweden in order to reconstruct the climate variability during the last decades to centuries.

For the analyses of internal growth patterns, shells are cross-sectioned, polished and immersed in Mutvei´s solution. Afterwards, the structures are measured by digital image processing. Ontogenetic trends are estimated with spline functions and eliminated from measured annual increment width chronologies by detrending (division of measured by predicted growth). Then, the data is standardized. SGI indices are dimensionless measures of shell growth and enable direct comparison with instrumental climate records. For the determination of ?13C and ?18O values, shell powder (60 to 80µg) is milled from polished (unetched) cross-sections.

Annual shell growth, ?18O and ?13C values show distinct quasi-decadal oscillations. These cycles are closely linked to environmental factors such as temperature, the NAO (North Atlantic Oscillation), the NATP ( North Atlantictripole SST index) and sunspot activity. Faster growth occurs at warmer temperatures, during positive states of the NAO and NATP and increased sunspot activity. While the cause-effect relationships between shell growth and environmental factors are not yet fully understood, physiological processes and hence shell growth is most probably directly linked to water temperature.

Our study demonstrates that mussel sclerochronologies can be used to verify, validate and extend existing climate reconstructions, e.g. proxy climatologies based on tree-ring data.
The NRM granted access to the SEM to examine microgrowth structures that explain growth in a larger scale. Also new subfossil material could be gathered from the invertebrate and paleozoology collections. With this material an extention of my research in time and space is possible.