Investigating the history of life. 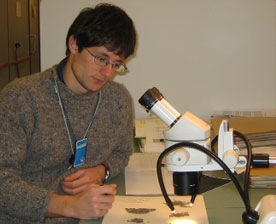 This was not Simones first visit to the museum, he first came as an Erasmus student in 2001 and then via the HighLat program in 2004. He gained very much from the experience and help of the people working at NRM, and as a young systematist Simone found the experience very educating.

Simones main objective during his visit as a SYNTHESYS guest this time (November 2005), was to be able to complete the morphological study for all the taxa he needed to include in his work. The collections and facilities at NRM were essential in his work.

Simones work was based on phylogenetic systematics, which is a discipline not practised in Italy. Therefore little education could be received from his own university, and experiences in foreign institution such as the Swedish Museum of Natural History enriched his knowledge on the subject.
Phylogenetic systematics can be explained as the way that biologists reconstruct the pattern of events that have led to the distribution and diversity of what we today might define as life.

The project aims to investigate the morphological variation between species of the genus Moehringia and its close relative Arenaria. Informative characters will be used to construc a morphological matrix to analyse with cladistic mathods to investigate phylogenetic relationships between the two groups.

It all started with HighLat

During the HighLat Program 2004 I got access to the Museum collections where I could study the morphology of the genus Moehringia (Caryophyllaceae). The numerous specimens available for the genus allowed me to observe a large number of characters to include in a data matrix to combine with the molecular information available for the group. More recently, new taxa have been added to the original molecular study, affecting the phylogenetic hypotheses emerged from the initial analyses. In fact, there is strong support to indicate Moehringia as a paraphyletic group, with some morphologically anomalous Spanish species more closely related to the similar genus Arenaria. These results suggest that a morphological matrix cannot leave out of consideration some representatives of the genus Arenaria in order to properly test the phylogenetic relationships of the Spanish Moehringia species. Therefore the aim is to expand the data set obtained from last year´s study at NRM with a representative number of Arenaria species, appraise their alleged close affinity to the Spanish Moehringia species, and gather the necessary information to complete the phylogenetic analyses.

The study of the phylogeny of the genus Moehringia is part of a larger project on the Mediterranean biodiversity hot-spot of theMaritime Alps . The genus Moehringia includes a high number of endemisms occurring across the Alpine arc, and the Ligurian species seem to represent a “basal" step in the evolution of the group.
During the last year, I produced a molecular phylogeny of the Caryophyllaceae family in order to clarify the taxonomic position of the Moehringia-Arenaria complex, to be used as a basis for successive investigations. I am currently working on the molecular relationships between the two genera, and new data seem to confirm Moehringia as a paraphyletic group. I am also conducting a study on the anatomy of some of the characters that seem to be of major importance in the evolution of the two genera (e.g. seed anatomy), in order to gain information on their origin and reliability in terms of homology.

The material at the Swedish Museum of Natural History is unique and essential for the study. The large collection of Moehringia species studied last year resulted of extreme value thanks to the large number of specimens available for each species. 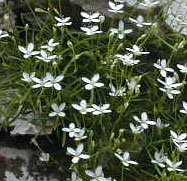 It certainly represents one of the amplest collections of Moehringia in Europe , all the more covering all the Spanish species that are so important in my study. Further, specimens of the Alpine endemic species I recently collected have been deposited at the Museum, enlarging the number of species available to observe.

Of extreme value is also the collection of the large number of species belonging to Arenaria subgenus Leiosperma fromSouth America , which appear to be strictly related to the Spanish Moehringia species. It is of great importance to include these representatives in the morphological study of the genera, and the Museum offers the possibility to have all the material at hand for an efficient comparison of the characters.

Since the beginning of my study, NRM has always been a reference for essential scientific advice. Completing the morphological investigation started last year will yield results for an international publication expectantly presenting co-authorship of the two institutions.

Further, since the Moehringia study is part of a large cooperation of Italian institutions working on the biodiversity of the Ligurian hot-spot, the results will have impact on a very active research context, emphasizing the importance of phylogenetic systematics as an essential approach often too little considered in Italy. In a distant prospective, I hope Synthesys will strengthen the relationships between the two institutions and be the start of further collaborative research in the years to come.