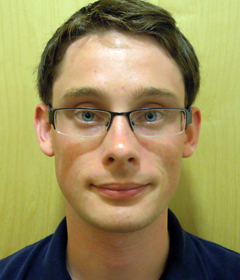 The PhD/graduate student Peter Heintzman from University of London was our SYNTHESYS guest during four weeks 2011.

Pete´s research focuses on the effects of the last ice age (100,000 — 10,000 years ago) on several species of beetle, utilizing both museum and ancient DNA. Given predicted future climatic change, it is important to identify how regions experiencing environmental changes are colonised by species. This can be achieved by investigating past periods of change.

- I stayed four weeks at the museum, says Pete. During this time, I spent two days sampling specimens of the beetle Amara alpina in the Entomology department and the remaining time performing DNA analyses of these collected specimens in the NRM´s dedicated ancient DNA laboratory at the MSL.

This work is the first to focus on the response of invertebrates to climatically driven change using aDNA. Previously, aDNA has been used to assess these recolonisation questions in a variety of animals, but has so far focused solely on vertebrates, thereby neglecting the far more ecologically important invertebrates.

Ground beetles provide ideal study taxa for this type of investigation. They are abundant in aDNA-preserving permafrost deposits, are shown to respond to climatic changes (based on the fossil record) and are readily identifiable. Amara alpina, the most cold-adapted ground beetle and therefore potentially most susceptible to future climate change, was the focus of this study. A. alpina has a circumpolar distribution from Scandinavia, through Siberia, to eastern Canada.

Utilising genetic information from both modern and ancient representatives, this work had so far focused on the recolonisation of Canada by A. alpina at the end of the last ice age. Early results indicated phylogeographic patterning within North America, with several major, easily identifiable groups. In order to test if these groups were unique to North America, museum specimens from Scandinavia and Siberia were tested at the NRM. In addition, independent replication of results from the analysis of fossil North American individuals was performed, as well as testing for the presence of the arthropod parasite, Wolbachia. 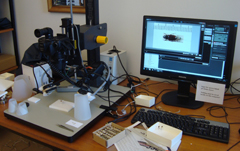 Photographing beetle specimens at the Department of Entomology prior to sampling. Photo: Pete Heintzman 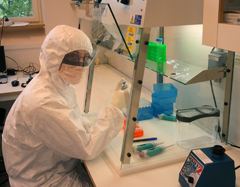 - I wanted to visit the Swedish Museum of Natural History for two reasons: it has a collection which includes the species that I am currently focusing on (Amara alpina), and it has a dedicated ancient DNA laboratory, which is perfect for performing DNA work on very old (more than 100 years old) museum specimens. I applied for a SYNTHESYS grant because the nature of this work falls nicely into its remit and, most importantly, the grant would provide me not only access and user costs (such as lab equipment, sequencing, etc.), but also pay for flights, accommodation and a contribution toward living expenses.

Pete spent most of his time in the museums Molecular Systematics Laboratory.
- It was very convenient to have both the museum collections and laboratories all on one site. The lab facilities at the MSL were excellent and very well organised. There were no major lab issues during my stay.

Despite all the hard work, Pete took the possibility to see more of Stockholm.
- I went into Stockholm several times during my stay. I visited the Vasamuseet, a museum dedicated to a 17th Century ship that sunk in Stockholm harbor and was subsequently resurfaced. I also visited the Nobel museum and the zoo at Skansen, as well as having a look around the old city. I found Stockholm to be an extremely pleasant, clean and accessible city.

The SYNTHESYS programme offers an excellent opportunity for collaboration between EU researchers, as well as providing the means to visit collections and perform in-house research. Overall, Pete really enjoyed his stay at the Swedish Museum of Natural History
- I would definitely recommend it to other potential visiting researchers, Pete says.