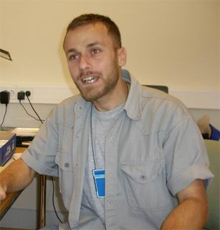 The reasons that Marco chose to come to Sweden were many, but foremost it was the expert knowledge and the advanced technological equipment at Naturhistoriska riksmuseet. Studying the collections was not the highest priority on Marcos´s list since the purpose of his visit here in Sweden was to create artificial minerals under controlled circumstances as well as to better understand what controls the mineral building processes within Earth´s crust. SYNTHESYS had given him that possibility.

Since this was Marcos second visit to Sweden (4 September - 29 October 2005) the museum´s informal culture was already familiar to him and something that he himself described as very positive and relaxing. It is with warmth and respect that Marco described his host, Henrik Skogby here at the museum. According to him, Henrik hasdbeen a good supporter during his stay, even acting as an immeasurably reliable contact and sympathetic source of information.

In Rome Marco shareed an office with ten other colleagues, something he compared to a small class with all its good and bad points. To take a coffee break together was something that Marco could easily introduce from Sweden. Since his experience made such a positive effect after his first visit to Sweden he started the same with his office colleagues at home in Italy. He said that it had a positive effect on the working environment and strengthened the relationships among colleagues.

Even if the minerals that Marco created can be considered false, Marco felt that the positive experience of his visit to Naturhistoriska riksmuseet was definitely true!

Exemple of different composition spinels
synthesized at NRM. It is evident the
characteristic octahedral shape of crystals
belonging to spinel group minerals
(size: ca 200 μm).
Spinels are minerals generally associated with upper-mantle-derived rocks and are considered to be valuable petrogenetic indicators of the environment of formation. Several studies on mineral assemblages containing spinels have been carried out to estimate mantle intensive parameters T, P, oxygen fugacity (fO2) and their changes. Spinel group minerals are characterized by a unit cell in which find place two different cation sites, one with tetrahedral coordination called T and the other with octahedral coordination, called M. Tetrahedral and octahedral sites are occupied by divalent and trivalent cations, A and B respectively, giving a general crystal-chemical formula of T(A)M(B)2O4. The spinel mineral group exhibits a wide range of compositions, related to which cations enter in the structure. In general, spinels do not adhere absolutely to a configuration in which A cations are in T site and B cations are in M sites. So that the real structure is dominated by octahedral - tetrahedral disorder of A and B cations due to spinel thermal history and cation “site preferences".

Spinels we considered for this research project belong to the chromite-magnetite join, where chromite, T(Fe2+)M(Cr)2O4, is a non-magnetic spinel, while end-member magnetite, T(Fe3+)M(Fe2+,Fe3+)2O4, is a magnetic spinel. Natural spinels within this join may be found but they usually host small amounts of other cations. So that, synthetic materials of well-defined compositions are generally studied to minimize system complexity and define intracrystalline mechanisms. Spinel single crystals, with size in the range 0.1-1 mm and controlled composition will be therefore the main output of this research visit.

NRM is a very good structure for experimental mineralogy. The high temperature furnaces NRM is provided, could allow to synthesize crystals of desired quality and composition due to the reliability of instruments and facilities. In order to obtain desired quality products is suggested, in fact, to work with instruments that just allowed a number of synthesis experience and were checked to support oxygen-fugacity-controlled conditions. The syntheses of spinels will be done by using the flux-growth method that consist in mixing analytical grade Fe2O3 and Cr2O3 oxide powders with Na2B4O7 used as flux compound that helps to decrease the melting temperature of powder mixture. Thermal runs will be performed in a vertical furnace equipped with CO2 and H2 flow controllers at temperatures from 1200 to 900°C applying slow cooling of 4°C/hours that allows the growth of crystals. Furthermore, microscopy and spectroscopy laboratories NRM is provided will be useful to analyse products and to verify the success of synthesis runs.

As first use, the materials and data produced will be included in the major thesis in Mineralogy of Earth Science PhD project I´m carrying on. Furthermore, results obtained on this materials both during the proposed visit at NRM and once back in Italy, will be utilised, as well as in the recent past, to prepare publications at international level, contributions to international meetings and workshops co-authored by Italian and Swedish NRM researchers. The exchange of knowledge and specialist skills will strengthen the already active and prolific cooperation between Swedish research group and Italian research group I belong to, and it will serve as a base for further pan-European research projects.