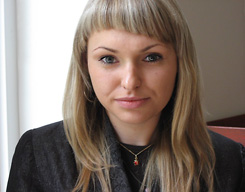 Miridae-Cylapinae, a species-rich group of plant bugs, was the main topic of Izabela Sadowska-Woda´s research. She visited SE-TAF two times to work on two different projects. During her first visit, from 13 August to 16 September 2006, she had the opportunity to work in the friendly and professional scientific environment at the Laboratory of Molecular Systematics. Izabela got acquainted with the application of molecular methods to study dried insect materials. She is grateful to the staff at the lab and for the chance to learn directly from the specialists.

During her second stay at NRM in February 2007, Izabela examined collections of one group of Cylapinae held at the Department of Entomology. The entomological collections at NRM are rich in types, and comprise material from numerous expeditions to various parts of the World during more than 200 years, including recently collected specimens from the southern hemisphere as well as from SE Asia. A large number of Cylapinae species remain unidentified. The collections were crucial for Izabela's studies, and she is indebted to her host, Kjell Arne Johanson, for his support during her visit.

I am dealing with Miridae-Cylapinae (Heteroptera), a species-rich group of plant bugs. Fulvius Stål, is the most species-rich and widely distributed genus within the subfamily Cylapinae. The genus was established by Stål for a single species, F. anthocorides from Mexico. The type of this genus is housed at the Department of Entomology at SE-TAF.

Currently, this genus comprises 80 species. Representatives of the genus are widely distributed in the tropical and subtropical areas all over the world. Many species are morphologically similar. It was not known whether this similarity is a result of their close relationships, or whether it is connected with their occurrence in similar environmental conditions, thus results from convergence. Cladistic analyses based on morphological characters revealed the genus Fulvius to be a natural taxon, which can be divided into three groups: bisbistillatus, including all Neotropical species, bifenestratus, consisting of oriental species, and anthocoroides, grouping mainly oriental, afrotropical, palearctical species and also species from Indo-Pacific islands. 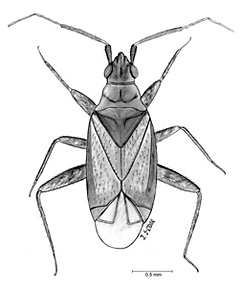 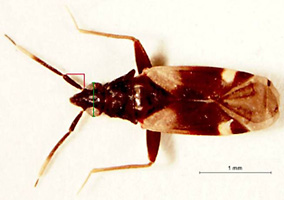 Fulvius anthocoroides Reuter, dorsal habitus.
In autumn 2006, I had the opportunity to work in the friendly and professional scientific environment at the Laboratory of Molecular Systematics at SE-TAF to work on "Cladistic relationships among species of the genus Fulvius Stål: congruence between morphological and molecular data sets". I got acquainted with the application of molecular methods to study dried insect material.

The objectives of the project were (1) to generate the molecular data sets for species from morphologically different groups of the studied genus; (2) to perform cladistic and zoogeographic analyses using both molecular and morphological data; (3) to investigate phylogenetic relationships within the genus Fulvius, and (4) to find the most likely centre of origin and ways of migration. The results based on molecular data revealed congruent groups of Fulvius species as those based on morphological characters (publication in preparation).

Cylapinae is one of the most primitive subfamilies among other mirids. A very important plesiomorphic character state is their carnivory. Traditionally, the subfamily Cylapinae was divided into four tribes, Cylapini, Fulviini, Bothriomirini (Carvalho, 1957), plus Rhinomirini, which was recently established by Gorczyca (2000). Schmitz & Stys (1973) and Schuh (1976), considered Fulviini to be a monophyletic, well-differentiated group. However, the current view is that there is no unique tribal character for this tribe and that the Cylapini and Fulviini are almost certainly not monophyletic (Schuh 1995; Schuh & Slater 1995). The tribe Fulviini comprises numerous genera (currently about 50 described), and is the most widely distributed of the Cylapinae tribes.

The main objective of the second project was to examine morphological characters to reconstruct the phylogeny of the tribe Fulviini. I studied both dry (pinned) and alcohol-preserved specimens, described and named undescribed species, and defined the character states to be implemented in phylogenetic analysis of Cylapinae.
The entomological collections at NRM hold many types, and comprise material from numerous expeditions to various parts of the World during more than 200 years, including recently collected specimens from the southern hemisphere as well as from SE Asia. The study of this material is crucial to my ongoing research.

SCHUH, R. T., 1976. Pretarsal structure in the Miridae (Hemiptera) with a cladistic analysis of relationships within the family. American Museum Novitates 2601: 1-39.