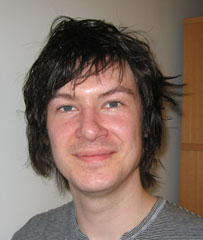 Ben Slater, doctoral student at the University of Birmingham, Great Britain, visited the department of palaeobotany at NRM for six weeks in the spring of 2010. He is studying 260 million-year-old fossil plants from Antarctica .

The two main reasons for Ben to choose NRM as a guest researcher were the competence of supervisor Steve McLoughlin who is working at the museum, and the unique collections, one of the largest collections of fossil plants in the world. In particular, the large collections of Antarctic fossils that Ben is interested in are held in only two institutions in the world. He also appreciated the high standards of the facilities like the scanning electron microscope, and the HF-lab.

His aim with the Synthesys-project was to work with fossils in NRM collections, which were collected by Steve McLoughlin in Antarctica in the 1990s, that are central to his doctoral thesis. The principal objective of his thesis is to reconstruct the vegetation of the late Palaeozoic in the Prince Charles Mountains, East Antarctica .

During his stay in Stockholm Ben also visited some of the exhibitions at NRM, 4½ billion years - The History of Life and Earth, was one of them, which he found very interesting. He also
took the time to look around in Stockholm , “an impressive and unique city that is great to explore", and visited among others the Vasa museum, Skansen and the Biological Museum. 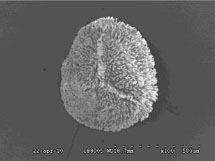 The community preserved in the silicified peats was deposited at >60°S during the Middle Permian and has no modern analogue. The floral assemblage is dominated by Glossopteris, which is abundant throughout temperate deposits of Permian Gondwana. The typical Glossopteris dominated floras of the Mid-Late Permian disappear and are replaced by Triassic floras dominated by plants such as Dicroidium seed ferns at the end-Permian.

The anatomical detail revealed in the peats provides a rare opportunity to reconstruct some of the important plants of the Permian Antarctic floras which contributed their biomass to the economically important coal deposits of the southern hemisphere. My visit to the Swedish Museum of Natural History in the department of Palaeobotany allowed me to access material and facilities essential to the research on the floras that produced these peats. I was able to utilise the SEM facilities to study macerated material from the peats which yielded a large amount of new information. In addition, through the use of the HF laboratory, peels were produced which allow the study of anatomical detail in the plant remains, revealing new characters to the structure of these Permian plant taxa. 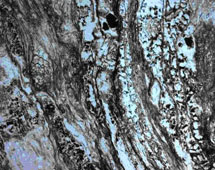 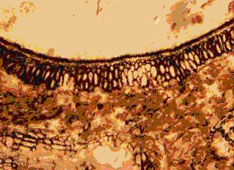