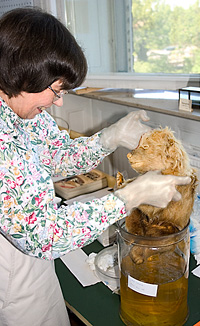 Anthea Gentry, Research Associate at the Natural History Museum in London, studied the extensive and historic collection of mammals and birds used by Linnaeus in describing many new taxa (5 February-4 March 2006). Once completed, the work will make known the specimens seen by Linnaeus, their identity in the light of modern taxonomy, and will provide descriptions and coloured photographs.

The material was originally in the cabinet of King Adolf Fredrik (1710-1771) at Ulriksdal palace. In 1751 Queen Lovisa Ulrika invited Linnaeus to study the King´s vertebrate material and her own, invertebrate, collection at Drottningholm palace. Linnaeus subsequently spent a total of nine weeks in 1753 and 1754 at Ulriksdal. After the King´s death the material at Ulriksdal was moved in 1773 to Drottningholm, and in 1801 became part of the collections of the Royal Swedish Academy of Sciences in Stockholm. It was incorporated in the NRM collections in 1828.

The collection is unique and forms the larger part of Linnaeus´s type material of mammals and birds. It is a major and irreplaceable international asset that is, however, so far unknown to those working on the taxonomy and systematics of these groups. The collection is of great scientific, cultural and conservational value and its study was central to Anthea's project.

Linnaeus produced two catalogues of the King´s material (1754 and 1764). The earlier catalogue was incorporated in the 10th (1758) edition of the Systema Naturae, which is the basis of modern zoological nomenclature, and both catalogues were included in the larger 12th (1766) edition.

Anthea is grateful for financial assistance through the Synthesys programme and to members of the Vertebrate Department for their generous support and fruitful discussions. 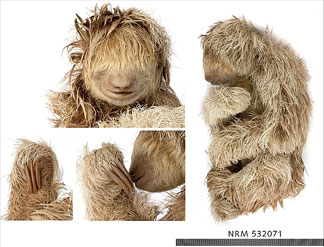 The specimens used by Linnaeus in founding taxa in various plant and animal groups have already been described, but the material which is the basis of his mammal and bird species has so far not been studied. His mammals and birds are currently known only from his original descriptions which, in many cases, are ambiguous. My project will remedy these omissions.

Three objectives for my study are: (1) to ascertain those specimens which can be certified as Linnaeus's type material; (2) to identify the specimens in the light of modern taxonomy and to describe and illustrate them; and (3) to relate these specimens to the descriptions of specimens by authors earlier than Linnaeus and cited by him (under the International Code of Zoological Nomenclature the earlier specimens have equivalent status to Linnaeus's own).

The method of naming and classifying animals and plants by the Swedish naturalist Carl Linnaeus in the mid 18th century laid the foundation of current systematic biology and is still in use today. Modern zoological nomenclature dates from 1758 (Linnaeus´s Systema Naturae, 10th edition).

Under the Code of Zoological Nomenclature, the original animal specimens studied by Linnaeus are the types of the species described by him. Linnaeus´s specimens are thus the objective standards of reference on which all other taxonomic work is based.

My project is concerned with Linnaeus´s mammals and birds.There are collections of specimens described by him in Stockholm, Uppsala, the Natural History Museum, London, and in other European institutions. The collection in Stockholm is extensive, derived from the cabinet of King Adolf Fredrik (1710-1771), and Linnaeus described the material in two catalogues (1754 and 1764). The 1754 catalogue was incorporated in the 10th (1758) edition of his Systema Naturae, and both catalogues were included in the larger 12th (1766) edition.

I have done much literature research in libraries and archives in London and Stockholm to become acquainted with the historical background to the Linnaean collections in Stockholm, Uppsala, London and other institutions. My study of Linnaeus's mammal and bird material will be prefaced by an account of the history of the collections in relation to these two groups.

During my previous visits to Stockholm I made much progress in the study of Linnaeus´s mammal material. I have been able to describe the specimens, to compare them with Linnaeus´s own descriptions, and to identify the specimens from current catalogues and field guides. Comparison for identification with mammal material in the Natural History Museum, London, study of early literature cited by Linnaeus in his own descriptions, and study of mammal material in other Linnaean collections is now well under way.

Photography of all the mammal and bird material in Stockholm is complete. The pictures were taken in June 2004 by Harry Taylor, Higher Photographic Officer in the Image Resource Department of the Natural History Museum in London.

A detailed study of Linnaeus´s bird specimens, similar to that which I have already undertaken for mammals, is highly desirable and as part of my project I wish to have support for a further visit to Stockholm.

As noted in the section above, there are also collections in Uppsala, the Natural History Museum in London, and several other European institutions, and these will also be included.

The study, once completed, will give an understanding of Linnaeus´s surviving material of mammals and birds.

I have made previous visits to Stockholm under the High Lat funding scheme. My time was spent mainly working on the mammal specimens in the Linnaeus collection. A similar detailed study of Linnaeus's birds will allow the completion of my work on these two as yet undescribed groups.