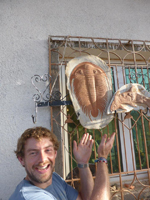 Tim research interests are devoted to unraveling the events surrounding one of the most profound phases of change in the history of life on Earth, the Cambrian ‘explosion’. Tim works mainly on the phylogeny, evolution and ecology of Cambrian faunas, with a particular interest in ‘Small Shelly Fossils’ and members of the Lophotrochozoa. Small Shelly Fossils represent some of the earliest representatives of multicellular animal life with hard parts and provide a window to investigate the momentous evolutionary events that occurred in the Early Cambrian. Tim also has broad interests in the application of these fossils to biostratigraphy, biogeography and palaeoenvironmental analyses.

Project I. Shallow origins? – Evolution of animal skeletons in the earliest Cambrian