Effects of agricultural management on arable bryophytes in Switzerland 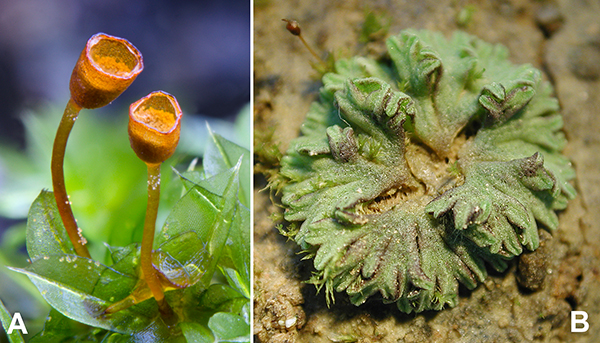 Arable bryophyte specialists: Tortula truncata (A) is common and often forms plenty of sporophytes; Riccia warnstorfii (B) is declining in Switzerland. Photos: Lars Hedenäs (A), Norbert Schnyder (B)

Agricultural cultivation over thousands of years in Europe has resulted in a complex landscape mosaic that sustained a rich and diverse wildlife. However, agricultural intensification during the last century is a major driver of the ongoing alarming biodiversity loss. To halt the severe species’ decline in agri-ecosystems and to promote sustainable farming, most European countries adopted agri-environment schemes (AES). Arable land harbours many short-lived specialist species that have adapted to recurrent tillage. In this project, we investigate effects of crop farming practices, including AES measures, and weather effects on the specialised arable bryophyte flora in the cultivated area of the Swiss Plateau. During three periods (three to five years) from 1991 to 2018, we annually monitored the occurrence, abundance, and habitats of the hornworts Anthoceros agrestis and Phaeoceros carolinianus as model species of the characteristic arable specialists in Central Europa. Biodiversity Promoting Areas are a key element of the Swiss AES, designed to support the diversity of, e.g., arthropods, flowering plants, or ecosystem services, (e.g., pest control). We explore how they can also promote arable bryophyte diversity. We have shown a strong decline of arable bryophytes in the area despite existing AES that was accountable to a loss of suitable habitats. In the current final phase of the project, we reach out to regional and national authorities, farmers, and conservationists with recommendations for targeted modifications of current AES, aiming to safeguard the typical arable bryophytes in the Swiss arable landscape.

This research is funded by the Federal Office for the Environment (FOEN), Bern, Switzerland