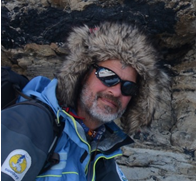 See the Staff and Contacts page.

I am responsible for the curation of the fossil vertebrate collections, for loans and guest researchers. I am a lecturer in paleontology at Stockholm University and Associated Professor for paleontology and historical geology at Uppsala University.

I am a vertebrate paleontologist and mainly interested in the evolution and phylogeny of Cenozoic (50 to 2.5 million year old) mammals, their relationships (systematics), their spatial and geographic distribution (biostratigraphy, paleobiogeography), and their paleoecology.

I am interested in the evolution of beavers 23 to 15 million years ago, during the Miocene Epoch. The project focuses on the biodiversity and relationships of members of the family Castoridae from Europe, East Asia and North America. In contrast to living beavers, fossil beavers were not entirely semi-aquatic, they inhabited different ecosystems and environments and ranged in body size from that of a hamster to a black bear. This research is carried out in collaboration with researchers from Germany, Japan, Sweden and USA.

Another research interest of mine is the biodiversity of Eocene to Pliocene, 50 to 2.5 million year old, vertebrate faunas from Germany The project investigates mainly the systematics and paleoecology of fresh water fishes, amphibians, reptiles, birds and mammals, with focus on the Mid-Miocene Climatic Optimum, 15 million years ago, when giant frogs and salamanders, alligators, chameleons, cobras and coral snakes, tropical birds, opossums, primates and tropical rodents inhabited Central Europe. This research is carried out in collaboration with researchers from Germany, Italy, Sweden and Switzerland.

My research in Antarctica is supported by the Swedish Polar Research Secretariat.

Project I. The Frozen Garden of Eden: Vertebrate paleontology in Antarctica