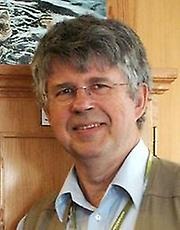 See the Staff and Contacts page.

As professor emeritus I am not employed at the museum and do not have formal responsibilities, but I take part in the daily departmental work and continue my work with research and collections.

I am interested in the (r)evolutionary transition of Earth’s life from an exclusively microbial biosphere to one characterized by the interplay between creatures large and small: animals, plants, fungi and – of course, still around – microbes.

The most dramatic change took place about 600–500 million years ago, but the roots extend much further back in time. It began with the first appearances of large multicellular organisms in the fossil record more than two billion years ago and ended with the new beginning: the iconic “Cambrian explosion”, that by about half a billion years ago had produced a biosphere principally similar to that which exists today; only the land surfaces remained to be conquered.

A crucial role in the process was played by free oxygen in the atmosphere and oceans: released into the environment by photosynthesizing organisms (cyanobacteria, algae and plants), free oxygen is vital to energy-demanding, respiring organisms such as animals.

My work is carried out in cooperation with colleagues all over the world and is supported mainly by the Swedish Research Council.

Project I. Emergence of the modern biosphere – decrypting the early record