The Baltic (Fennoscandian) Shield and the Scandinavian Caledonides 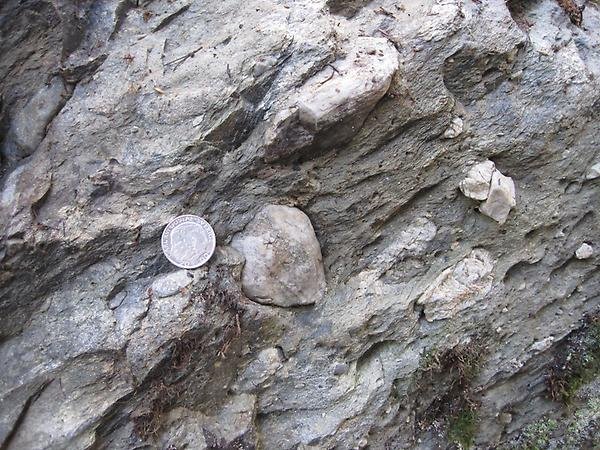 Tillite (diamictite, petrified moraine) from the bottom of the Särv Nappe, Härjedalen county, Sweden. It contains small fragments of different rocks which potentially can be Sveconorwegian, or affected by Sveconorwegian metamorphism.

This project comprises several smaller studies. One study concerns the well preserved sandstones of the Västervik quartzite in southeastern Sweden, which were deposited in near-shore environments almost two billion years ago. The study will contribute to our understanding of the early evolution of the Svecofennian Orogeny, when much of the bedrock in Sweden was formed.

Another study aims to clarify to what extent the central parts of the Scandinavian Caledonides, which formed during a collision between two continental plates 400-500 million years ago, include rocks and materials affected by the about one billion years old Sveconorwe-gian Orogeny. One purpose with this study is to reconstruct the regional distribution of the Sveconorwegian Orogeny, and how it fits into a larger pattern of plate tectonic movements.