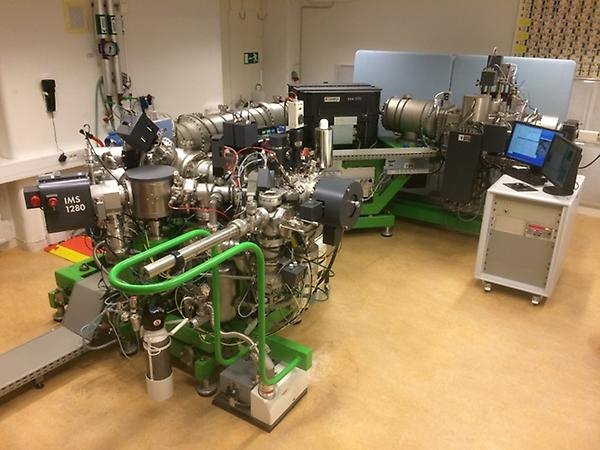 NordSIMS’ CAMECA IMS1280 instrument used for most of the project research.

In the last few years, the idea that the Earth and Moon share a common early history is gaining increasing recognition by the scientific community. This concerns not only models for the origin of the Moon by the Giant Impact (i.e collision of a Mars size body with proto-Earth) which can explain close similarities in their chemical and isotopic compositions, but also a remarkable match in the nature of magmatic processes that shaped the early history of the two planetary bodies and their history of bombardment by projectiles of different sizes.

It is clear that answers to a significant number of questions related to the early history of the Earth can be found on the Moon, where internal activity was extinguished very early preserving the first stages of planetary evolution that have been erased on the accessible Earth by over four billion years of active plate tectonics.

The current project bridges the gap between lunar and terrestrial geology by applying essentially the same analytical methods to samples from both bodies. Of key importance is the mineral zircon, the only extant remnant of the Earth prior to 4 Ga (zircon <4.4 Ga is found in sediments from western Australia) and present on the Moon with ages up to 4.5 Ga in regolith soils. Zircon and its microscopic mineral inclusions will be studied using a wide variety of in situ analytical methods targeted to understanding its formation in melts and what it can tell us about its parent magma, constrained by parallel study of in situ zircon in some of Earth’’s earliest preserved rocks from ca. 3.8 – 4.0 Ga.

A second aspect of this project focuses on lunar basalts, samples of the mantle of the Moon (and, by analogy, the long-lost early mantle of the Earth). Using a newly developed in situ Pb-isotope analytical protocol, our work is providing new dates of unprecedented precision for the lunar basalt suite (both Apollo samples and meteorites) and helping to constrain both lunar mantle reservoir evolution and the presently poorly known age of the Moon. These results will not only constrain early magmatic processes on the moon but will be of direct relevance to the early earth.

A third sub-project involves the study of rare meteorites from Mars, analysis of which is being used to constrain the chemical geodynamics of the planet, from its earliest formation and differentiation studied by Pb isotopes through to surface reservoir interactions studies by O- and Cl- isotopes and halogen contents.