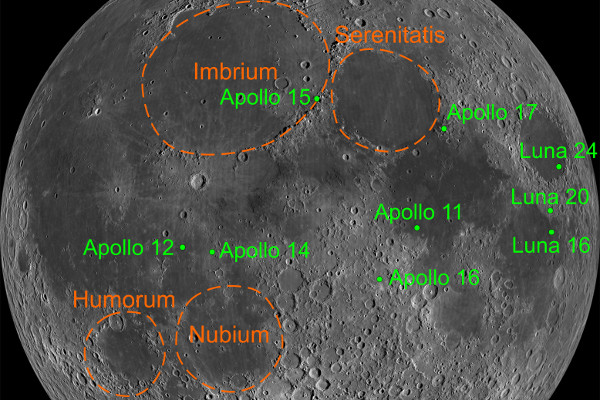 Map of lunar impact basins and sampling locations of the Apollo and Luna missions.

The rate of impact cratering in the Solar System has changed over time, and is thought to have been significantly higher early in the history of the Solar System. Furthermore, it has been proposed that there may have been dramatic spikes in the number of impact events at particular times in geologic history (for example, at ~3.9 billion years ago). As one of the most significant processes to affect planetary bodies (including the Earth), impact cratering has undoubtedly played a fundamental role in the geologic evolution of planets, but has also had a far-reaching effect on the evolution of life on the Earth. Therefore, understanding how the meteorite bombardment rate has changed over time is vital to forming a more complete picture of our Solar System’s evolution.

We are using Secondary Ion Mass Spectrometry (SIMS) to analyse the U-Th-Pb isotope systematics of Ca-phosphate and zircon minerals in lunar breccias – i.e. rocks formed during meteorite impacts on the Moon – in order to determine the time at which these rocks were formed. This has provided us with significantly more precise ages than were previously available for a number of lunar breccias. These ages are being used to investigate the timing and frequency of impact cratering on the lunar surface, and investigate long-standing questions, such as whether there really was a spike in impacts at ~3.9 billion years ago.

This research is funded by Vetenskapsrådet (the Swedish Research Council) and Knut and Alice Wallenberg Foundation.