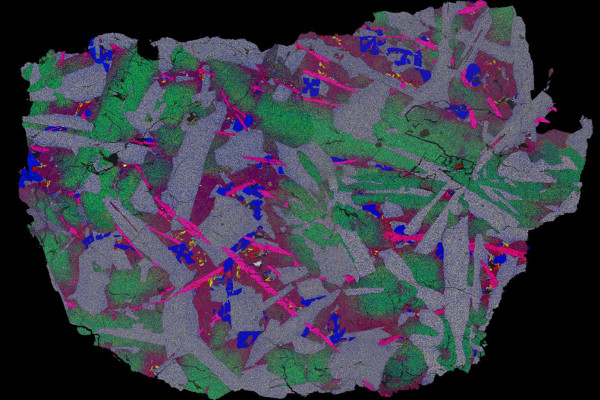 False colour element map of a lunar basalt collected during the Apollo 12 mission.

The most widely accepted model for the formation of the Moon is that it originated from the debris generated during a giant impact between a Mars-sized body and the early Earth. It is thought that the heat produced as this debris accreted resulted in the formation of a global “magma ocean” covering the surface of the Moon. The cooling and crystallisation of this magma ocean led to the formation of the lunar crust and the reservoirs of material in the lunar mantle that would be subsequently erupted onto the Moon’s surface.

We have developed a new approach for determining precise crystallisation ages of the lunar basalts that formed in these volcanic eruptions, by analysing their Pb isotopic compositions using Secondary Ion Mass Spectrometry (SIMS). We are using these ages and isotopic compositions to construct a model that will help us understand the sources of lunar volcanic activity, the evolution of the lunar magma ocean and, ultimately, when the Moon itself was formed.

This research is funded by Vetenskapsrådet (The Swedish Research Council) and Knut and Alice Wallenberg Foundation.