From geological correlation between Baltica (northeast Europe), Amazonia (central South America) and West Africa, it appears that these ancient cratons were connected during most or the Proterozoic, i.e. for at least 1 billion years.

As a spin-off of my studies in Blekinge and Bornholm (southernmost Fennoscandia), the question arose what lay to the southwest of the Fennoscandian Shield in the Proterozoic, when the bedrock in these areas formed, an ocean or another continent (since central and southern Europe did not exist at that time). Since Amazonia (the central part of South America) has been suggested to have collided with Baltica (northeast Europe, including Fennoscandia) during the Grenville-Sveconorwegian orogeny at around 1.0 Ga, it was natural to look at Amazonia's geology and to compare it with Baltica's.

Both these areas consist of Archean nuclei in the northeast, followed by Proterozoic orogenic belts which become gradually younger towards the southwest. If Amazonia is rotated ca 60 degrees clockwise, its northwest margin may be fitted against Baltica's southwest margin (the Trans-European suture zone that runs from the North Sea to the Black Sea), so that orogenic belts with the same age can be followed from Amazonia to Baltica. Based on this correlation, a fit with northern Amazonia attached to southwest Baltica is suggested to have existed from at least 1.8 Ga to at least 0.8 Ga, and perhaps to 0.6 Ga. West Africa was probably attached to northeast Amazonia and southeast Baltica during the same time period, forming one coherent landmass.

As in most plate tectonic reconstructions, northwest Baltica was attached to eastern Laurentia (Greenland) from at least 1.9 to at least 1.3 Ga, and western Amazonia thus formed a continuation of the southeast Laurentia — western Baltica active margin, being characterized by intermittent crustal growth and orogenic deformation during the late Palaeoproterozoic and Mesoproterozoic, as well as periods with more inboard intraplate magmatism.

In order to arrive at the “standard" Rodinia configuration, Baltica must have separated from Laurentia and, together with Amazonia and West Africa, rotated c. 75° clockwise relative to Laurentia (or c. 160° if an alternative, paleomagnetically preferred start configuration for Columbia with northern Baltica along eastern Greenland is used instead; see Johansson (2014) for discussion as well as the animation below for an example). During the 1.1 to 0.9 Ga Grenvillian — Sveconorwegian — Sunsas orogeny, the western margin of Baltica and Amazonia collided with the southeast margin of Laurentia, as part of the formation of the Neoproterozoic supercontinent Rodinia. 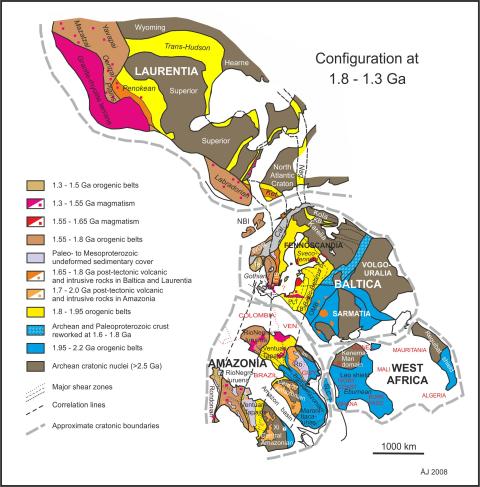 Reconstruction of Baltica, Amazonia, West Africa and parts of Laurentia (North America) between 1800 and 1300 million years ago. 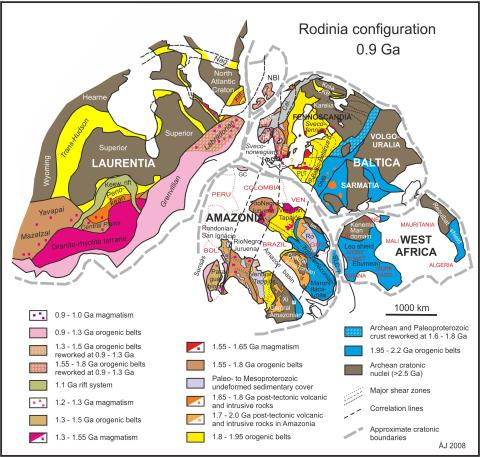 Reconstruction of Baltica, Amazonia, West Africa and parts of Laurentia (North America) at around 900 million years ago.

A popular science version in Swedish is available in the Swedish journal Geologiskt forum:

A discussion of ore geological implications of the SAMBA model can be found in an extended abtract from the 12:th SGA meeting in Uppsala, Sweden, in August 2013:

A follow-up article on the SAMBA model, the late Proterozoic supercontinent Rodina, and its transformation into the succeeding "half" supercontinent of Gondwana, was published in 2014 in Precambrian Research:

A short discussion (comment to an article by Gee et al. 2015) on whether a northerly branch of the Grenville - Sveconorwegian orogen may have existed in the hinterland of the Scandinavian Caledonides, continuing into the present-day High Arctic, has also been published in Precambrian Research, and presented at the 32:nd Nordic Geological Winter Meeting in Helsinki, Finland, in January 2016:

Since then, I have coordinated a compilation of magmatic U-Pb ages in the age interval 2300 to 800 million years, i.e. during the formation and existence of the Columbia supercontinent, and the subsequent formation of the Rodinia supercontinent. The ages, all in all 4344 data records, are from the external margin of Baltica (northeast Europe), Laurentia (North America), Amazonia (central South America), and in part also the Kalahari craton (southern Africa and Dronning Maud Land in Antarctica) and western Australia. They are in part derived from existing geochronological databases from the respective countries geological surveys, in part from other compilations, and in part compiled manually from existing literature. In total, 22 co-authors from different countries have been involved in this work. The results show different peaks of magmatic activity in different continents, in part of similar age, in part of different ages. The best age correlation occurs between Baltica and Amazonia, which could be taken as support of the idea that these continents were close neighbours in a SAMBA-like configuration during much of this time period, and perhaps shared the same subduction system for considerable times. A powerpoint animation of the magmatism is provided below. The results were published in a paper in Precambrian Research in the begining of 2022:

The animation starts out with the paleomagnetically favoured configuration in which the (present-day) north coast of Baltica (Kola peninsula and further east) lies adjacent to the (present-day) east coast of Greenland at 1250 Ma. In this respect, it is different from the reconstruction on the map above, where northern Norway is adjacent to southeast Greenland. The reconstruction in the animation gives ca 160 degrees of total relative rotation between Laurentia-Siberia and Baltica-Amazonia-West Africa from 1250 to 950 or 900 Ma. This rotation has been distributed equally between the two continental blocks, with 80 degrees each, for lack of more precise data.

In connection with the paper by Johansson et al. (2022, see above), a powerpoint animation was prepared with a series of plate tectonic reconstruction maps for the time period 2300 to 900 Ma, showing magmatism along the external margins of Baltica, Laurentia, Amazonia, Kalahari and western Australia in 50 m.y. increments of time. A link is provided below. Another animation, showing the same magmatism as a movie superposed on the present-day configuration of the continents, as well as the compiled database (Excel spreadsheet), is availble from the journal website