The Proterozoic evolution of the bedrock of Blekinge and Bornholm

The bedrock of Blekinge in southern Sweden and the Danish island of Bornholm forms the southernmost exposed part of the Fennoscandian Shield, and has a unique evolution which this project attempts to clarify.

During the last few years, improved methods for U-Pb age determinations, and especially the possibility to date individual growth stages in single zircon crystals using the NORDSIM ion microprobe, have led to dramatically increased knowledge about the geological evolution of the Southwest Swedish Gneiss Province / Sveconorwegian Province (e.g. Söderlund 1999). The importance of the c. 1.45 Ga Hallandian thermomagmatic event (term originally coined by Hubbard 1975) has been underlined, both in terms of metamorphic overprinting with new zircon growth in older rocks, and intrusive activity with crystallization of new granitoids. However, the tectonic significance of this event is still poorly understood, in terms of whether this represents an orogenic event accompanied by deformation, or whether it is an essentially anorogenic thermomagmatic event. One reason for this is the later Sveconorwegian (c. 0.95 Ga) overprinting in Southwest Sweden, as well as the possiblity that older deformation is Gothian (c. 1.55-1.70 Ga). This has led to a heated debate on the evolution of Southwest Sweden between those who want to emphasize the importance of the Gothian episode, not just as a crust-forming event, but to form the main structure of Southwest Sweden by collision and accretion of magmatic arcs (e.g. Åhäll 1995, 1996, Åhäll et al. 1995, Christoffel et al. 1999), and those stressing the importance of Sveconorwegian high-grade metamorphism and deformation (e.g. L. Johansson et al. 1996, Andersson et al. 1999, Söderlund 1999 and references therein).

One way of resolving these problems is to cross the Protogine Zone / Sveconorwegian Frontal Deformation Zone, and go eastwards into an area that has escaped the Sveconorwegian overprinting, i.e. to Blekinge. Here, the relative importance of Gothian versus Hallandian tectono-magmatic activity can be easier evaluated. In an earlier NFR-supported project by me, the broad geochronological framework for the early evolution of the Blekinge province was outlined, with 1.7-1.8 Ga magmatic rocks (Västanå volcanites, ‘coastal gneiss´, Tving granite; Johansson & Larsen 1989) being deformed prior to the intrusion of the c. 1.45 Ga old Karlshamn-Spinkamåla granites (Åberg 1988 and references therein). Additional geochronological information from Blekinge has been published by Kornfält (1993, 1996). The younger, ‘anorogenic´ granites in southeast Sweden have been investigated by Åberg (1988 and references therein), and are the focus of a research project led by Svetlana Bogdanova (Lund University), who correlates them with unexposed magmatic rocks within the Baltic Republics and NE Poland (Mazury Complex). These ‘anorogenic´ granites have similar ages as the c. 1.45 Ga Hallandian event in southwest Sweden, and may thus be an upper crustal manifestation of the same thermomagmatic activity.

The Danish island of Bornholm is located in the Baltic Sea south of Blekinge, and has a Precambrian bedrock composed of gneisses and granitoids which is probably a continuation of the bedrock of the Blekinge province. At the same time, Bornholm forms an important stepping stone, connecting the bedrock of southern Sweden with the concealed Precambrian basement of northeast Poland and Lithuania, investigated through geophysics and in drill cores within the international EUROBRIDGE project. However, very little modern geochronological information existed from Bornholm prior to this project.

The aim of this project has been to focus on the older (Gothian or TIB-equivalents) metamorphosed magmatic rocks in Blekinge, using earlier samples already dated by conventional multigrain U-Pb (Johansson & Larsen 1989) complemented by new samples with good structural control, and apply refined dating methods, especially the NORDSIM ion microprobe, to obtain better determined magmatic crystallization ages and to study the effect of metamorphic overprinting. Of special concern is the age of metamorphism. U-Pb dating of titanite has also been used for determining metamorphic ages. On Bornholm, both the pervasively deformed gneisses and the more undeformed granites have been dated, using U-Pb NORDSIM spot analyses of zircon and titanite, as well as conventional U-Pb TIMS dating of titanite. These investigations have been complemented by major and trace element geochemistry and Sm-Nd isotope analyses of whole rock samples, and Lu-Hf isotope analysis of zircon, in order to determine the petrogenesis and tectonic setting of these rocks, and get some insight into the time of original crustal formation in Bornholm.

Correlation of events across the Protogine Zone is of major importance, since the areas on either side of this tectonic zone probably represent different exposed crustal levels through the same bedrock province. Correlation between the southeast Fennoscandian Shield (southern Sweden) and the concealed Precambrian basement of the East European Platform (NE Poland, Lithuania etc.) has been the focus of the EUROBRIDGE project (Bogdanova et al. 1996). Large-scale E-W-trending zones, one of which separates Blekinge from the more undeformed TIB granitoids to the north, continue in the basement of the Baltic States and Russia, and may play an important role in the tectonic framework of the region and for controlling c. 1.45 Ga magmatism in the whole area (cf. Bogdanova & Cecys 1999).

Research at Bornholm was supported by the Swedish Research Council (VR) during 2004-2005, and was carried out in close cooperation with Svetlana Bogdanova (Lund University) and Hemin Koyi (Uppsala University), as well as the Ph.D.-student Kristina Zarins (Uppsala University and Swedish Museum of Natural History). Subsequent work has been carried out in cooperation with Tod Waight (University of Copenhagen) and Tom Andersen and Siri L. Simonsen (University of Oslo). 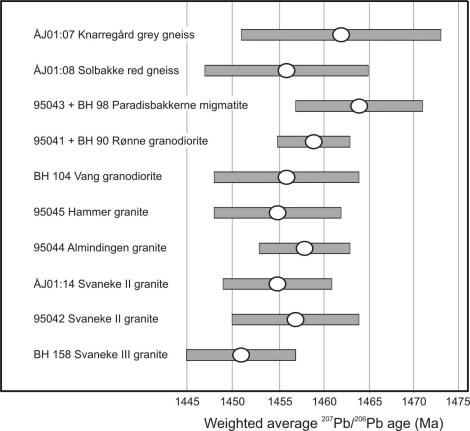 The results from the older bedrock of Blekinge, indicating ages of 1750 - 1770 Ma for most rock units as well as for the deformation affecting the Tving granitoids in eastern Blekinge, and thermal overprinting at around 1440 Ma, have been published in the Swedish geological journal GFF in 2006. A follow-up publication with Lu-Hf data from zircons was published in GFF in 2015. As a further follow-up study, zircons from some additional granitoids from eastern Blekinge that had yielded somewhat spurious results with previous U-Pb dating using multigrain TIMS technique, were reanalysed with SIMS technique, which provided magmatic ages in the 1750-1770 Ma range. The results were published in GFF in 2016:

Results on U-Pb dating of the Bornholm granitoids and gneisses, indicating crystallization ages of 1450 to 1470 Ma for all rock units, has been published in International Journal of Earth Sciences in 2009. A subsequent geochemical study, including Rb-Sr and Sm-Nd whole rock isotope geochemistry, and Lu-Hf zircon isotope geochemistry, has been published in Lithos in 2016: