The Swedish explorer and geographer Sven Hedin (1865-1952) travelled widely in Central Asia during several major trips and expeditions. His first major expedition in 1893-1897 was also his third trip to Asia.

During this expedition he attempted to climb Mt. Mustagh Ata (7500 m above the sea level), nearly died crossing western Taklamakan Desert, discovered ancient settlements in the desert, studied the region around the "wandering lake," Lop Nor, and crossed northern Tibet, arriving in Beijing in March 1897. He published a popular two-volume book, "Through Asia", and a volume of scientific reports. 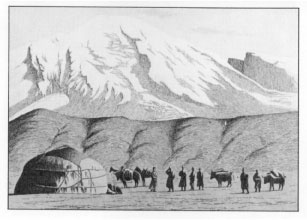 During his second major expedition to Asia 1899-1902 he continued his studies of the Lop Nor area, explored and mapped in Tibet, but was prevented from reaching Lhasa. On return he was ennobled by King Oscar II, the last Swede to be so honored. He published results of his travels in the two-volume book "Central Asia and Tibet" and in several volumes of scientific results.

In 1906-1908 he crossed Iran (then Persia) to India and from there entered Tibet despite British opposition. He made detailed observations in SW Tibet and made disputed claims to have discovered a previously unknown Transhimalaya range and the sources of the major Indian rivers. Results of the expedition were published in a popular 3-volume account, "Transhimalaya", and a decade later a 9-volume collection of scientific results.

His last major expedition, 1926-1935, involved substantial German and Chinese participation and scientific studies across a variety of disciplines. He spent significant time in Mongolia and en route to the Tarim Basin, was held captive by the forces of the rebellious Dungan warlord General Ma, and studied the historic shift of Lake Lop Nor back into its former location. While the expedition was still underway he wrote several popular books on it and then launched publication of the scientific results, which appeared in 54 volumes down into the 1980s.