When Hjalmar Sjögren (1856-1922) in 1902 became curator at the Department of Mineralogy, Swedish Museum of Natural History, he donated his lagre mineral collection to the unit.

Hjalmar Sjögren (1856-1922) who was the son of Anton Sjögren (1822-1893), inspector of mines in Persberg, county of Värmland, was strongly influenced by his environment at an early stage. 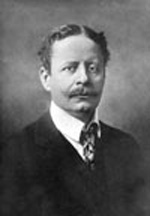 After a degree in mining engineering at Lund University in 1880, and a short period at the College of Commerce, he continued his academic career at Uppsala University where he, after receiving his doctoral degree in 1882, held a temporary professorship in mineralogy and petrology 1882-1884.

In 1885 the Nobel brothers employed Sjögren as geologist for Naftabolaget (Nafta Corporation) in Baku, Russia. He worked there for five years as an exploration geologist during the oil-fever in the area. During this period, he met Anna Nobel, with whom he married in 1889.

The same year he was appointed professor in mineralogy and geology at Uppsala University. He resigned his chair in1894 to run his private business and to take care of his private mineral collection at the newly purchased Nynäs Manor just outside Nynäshamn. It may be mentioned here that Sjögren was one of the driving forces for building the Nynäsbanan railway.

After the death of Adolf Erik Nordenskiöld in November 1901, Sjögren became curator at the Department of Mineralogy, Swedish Museum of Natural History. Sjögren worked at the department until he unexpectedly deceased on 23 March 1922.

Sjögren´s scientific work concerned mainly mineralogical, crystallographic and ore geological problems. He did, among other things, extensive investigations on a number of rare minerals from e.g. Nordmark and Långban in the county of Värmland.

Some of these minerals such as tilasite, retzian, adelite and svabite were previously unknown. His research related to ore geological problems was mainly focused on the formation of iron ores in Bergslagen and the Norwegian iron- and sulphide ores, e.g. Dunderland and Sulitelma.

Sjögren´s mineral collection is probably the most exclusive that has ever been gathered in Sweden, and is maybe also among the World´s most prominent private collections. In marrying Anna Nobel, Sjögren became economically independent, and during a ten year period (c. 1890-1900), he spent about 130 000 Swedish kronor on mineralpurchases (compare to the annual salary for a professor was c. 7000 Swedish kronor at the time).

Apart from a number of mineral specimens that originate from various mines around the world, the collection also contains his and his father´s original material used in their scientific works.

Most of the mineral specimens were offered for sale on the international mineral market by vendors such as Nordiska mineralier (Nordic Minerals), Foote Mineral Company, George L. English, Julius Böhm and Dr. F. Krantz.

The most exquisite mineral samples of the Sjögren collection are displayed in the glass tops of the beautifully intarsia-decorated original cabinets from the end of the 19th century.