Ekman contributed to the knowledge of the Caribbean flora more than any other previous scientist had done. 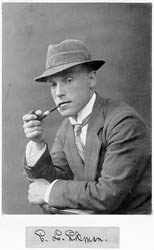 The botanist Erik Leonard Ekman was born in Stockholm in 1883 and grew up in the mid-Swedish town Jönköping from 11 years of age.

Ekman took his bachelor's degree in 1907 at Lund's University in the south of Sweden and was offered free passage on a ship to Argentine with the Swedish shipping company; the Johnson Line.

He spent 3 months in Misiones collecting plants and was supported by the Swedish colony that had been established in that area.

During his stay in Argentine he was offered a position as the Regnellian amanuensis at the Swedish Museum of Natural History in Stockholm which he gladly accepted and he started his service at the museum in 1908.

Ekman presented his doctoral dissertation at Lund's University in 1914 and went the same year on the third Regnellian expedition to South America. His goal was Brazil, but Ekman got an assignment from the professors Urban (from Berlin) and Lindman (from Stockholm) to make a short stop on Cuba (1 month) and Hispaniola (8 months) to collect for Urban's floraproject: "Symbolae Antillanae".

Ekman did so under protest but his plan to go to Brazil for two years was delayed because of some political disturbances in Haiti and a plague in Cuba.

Ekman landed in Havana in April 1914 and he remained on Cuba for 10 years except for a short visit to Haiti in 1917. His stay in the Caribbean was shown to last for 17 years.

​Haiti and the Domincan Republic

After various conflicts with, and pressures from, the Swedish Royal Academy of Science in Stockholm, Ekman finally went to Haiti in 1924 where he started an intensive field work period until 1928 when he went to the Dominican Republic to conduct more field work.

In the end of 1930 Ekman had decided to fulfil his original mission, that is to go to Brazil. However, this trip was not to be, since Ekman suddenly died at the age of 47, the 15th of January 1931 in the city of Santiago de los Caballeros in the Dominican Republic. He died from the after-effects of pneumonia, malaria-attacks and black water fever in combination with a heavy influenza without having ever returned to Sweden.

Ekman was buried in Santiago de los Caballeros where also a statue and a plaque have been erected in the honour of him. There are also streets in both Santiago and Santo Domingo named after him.

In Cuba there is a special department in the Botanical Garden named after Ekman, which contains plants in connection with him.

Ekman contributed to the knowledge of the Caribbean flora more than any other previous scientist had done. He discovered more than 2000 species new for science and that was during a period when the flora of the Caribbean was considered to be pretty well known.

His collections are still very actively used in the research on the Caribbean flora. He collected around 36000 numbers, which with duplicates amounts to more than 150000 specimens.

Ekman also did some geographical discoveries, he drew new maps over the mountains of Haiti and he discovered the highest peak in the Caribbean, Pico Duarte, with a height of 3175 meters above sea level. Ekman also collected birds, mammals and reptiles.

The Swedish Foundation Instituto Ekman was established in 1991 in the honour of him. The aims of the Foundation are to intensify the scientifical and cultural exchange between Sweden and the Caribbean countries.

A biographical work on Ekman is ongoing (authors Thomas A. Zanoni (NY) and Bertil Nordenstam (S)). The biography will deal with the person Ekman as well as his work, accompanying botanists in the field, his excursions, and his diaries. The bibliography will contain all Ekman's publications between 1909 and 1931 as well as any publication based on his collected plant material.