Erik Asplunds was a specialist in the flora of South America. In spite of that he made a numerous collecting journeys within the Scandinavian countries.

Erik Asplund was born 9th October 1888, in the parish of Jäder in the county of Södermanland, Sweden. He was son of the merchant Conrad Asplund and Vendela Maria Asplund, née Sahlin.

In 1908, he matriculated as a student in Nyköping and thereafter came to Uppsala to study at the university there. He passed his masters degree in 1913 and was promoted to Doctor of Philosophy in 1920. His dissertation thesis was on floral development in the family Valerianaceae: "Studien über die Entwicklungsgeschichte der Blüten einiger Valerianaceen".

Between 1921 and 1925 he was Associate Professor in Botany at Uppsala University. In 1927 Asplund was appointed assistant at the Department of Botany at the Swedish Museum of Natural History. He was promoted to curator in 1933, a position he held until his retirement in 1953. Asplund was made a Professor in 1957. He died on the 30th July 1974, aged 85.

Already as a young student, Asplund participated in several research expeditions. The first two journeys were to Spitsbergen (Svalbard) in 1913 and 1915. His major focus, though, became the flora and vegetation of South America, which resulted in his making numerous collecting journeys to this part of the world.

The first was to Bolivia in 1920-21, during which he also collected in Chile, Venezuela, Panama and Brazil. Asplund returned to South America in 1939-40, this time to collect in Ecuador, Peru and Colombia. A third journey was undertaken in 1955-56, to Ecuador, Peru and Venezuela.

Asplunds specialisation in the flora of South America did not, however, stop him from undertaking numerous collecting and study journeys within the Scandinavian countries, and he was a master of the vascular plants of the Nordic region. 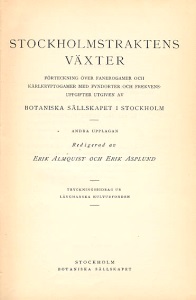 In total, Asplund published a dozen botanical publications concerning the flora of Northern Europe and South America. He contributed with no less than 429 numbers to Professor G. Samuelsson's collection of exsiccati of the flora of Sweden. These exsiccati were distributed to around 30 herbaria world-wide.

In 1937 he published the second edition of "Stockholmstraktens växter" in co-operation with Erik Almquist.

Given name to plants

Up to now, two plant genera have been named after him, namely Asplundia (Cyclanthaceae) and Asplundianthus (Asteraceae). In addition, 66 species have an epithet consisting of Erik Asplund's name in some form.

The scientifically and always extraordinary well prepared plant material collected by Erik Asplund, is kept in the Regnellian Herbarium at the Department of Botany at the Swedish Museum of Natural History.