Erik Acharius, the father of lichenology 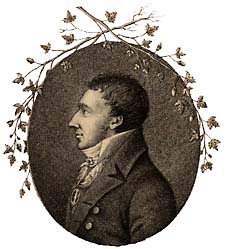 Linnaeus had grouped all lichen species in the same genus, Lichen.

Acharius described many new species and arranged them in 40 distinct genera. He created the first rational system for lichens and has been called the father of lichenology.

After the death of Acharius his lichen collection was sold to the Finnish Museum of Natural History in Helsinki. However, a large part of his collection was left in Sweden and is now at the Botanical Museum in Uppsala.

The Acharius material at the Swedish Museum of Natural History originates mostly from Olof Swartz' herbarium. It includes over 60 types of taxa described by Acharius. Acharius' collections of phanerogams and other cryptogams are kept at the Botanical Museum in Lund.

Erik Acharius was born in the Swedish town of Gävle in 1757. At the age of 17 he came to Uppsala where he studied botany as one of Linnaeus' last students.

After medical studies in Stockholm and Lund he served as a physician in southern Sweden. From 1789 he held a position as Provincial Medical Officer at Vadstena, where he died in 1819.

Methodus lichenum (1803)
Illustration from the book

Lichenographia universalis (1810)
Illustration from the book

The portrait of Erik Acharius comes from Synopsis methodica Lichenum.