Carl Linnaeus fil., son of Carl Linnaeus. He never receiced any academic degree, but followed in his fathers footstep. 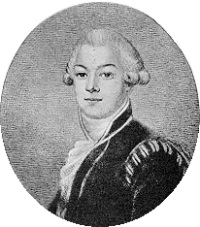 Carl Linnaeus fil., son of the famous natural scientist Carl Linnaeus was born on the 20th of January, 1741 in Falun, Sweden. Due to his father's merits, he was enrolled as a nine-year-old at the medical institution at the University of Uppsala. Linnaeus engaged his best students P. Löfling, D. Rolander and J. P. Falck in the task of educating his son.

Linnaeus fil. never received any academic degree. However, due to his father's recommendations, the Botanical Garden in Uppsala appointed him, only 18 years old, as a botanical demonstrator. Linnaeus thereby hoped that his son would become more interested in botany.

Linnaeus was in 1762 honoured to choose his successor. Daniel Solander was first asked but when he declined, due to his appointment at the British Museum in London, Linnaeus son was chosen as the successor. In 1763, he entered the duties as a professor in survivans, i.e. without salary until his precursor had retired.

In 1765 Linnaeus fil. was conferred a doctor's degree of honour after the will of the university chancellor, Crown Prince Gustav. Linnaeus fil.'s undeserved promotion caused a great deal of indignation, which became an inconvenience for him. The pressure of the demands to live up to his father's position was probably burdensome. In 1777, he entered the office of professor. During the year 1781 to 1783 Linnaeus fil. made a botanical journey through western Europe. He visited England, Paris, Belgium, the Netherlands, Hamburg, Kiel and Copenhagen. During his stay in London, he caught the yellow jaundice and died soon after he returned to Sweden, November 1 1783, at the age of 42.

When Linnaeus fil. needed the herbarium in his work he had to write an acknowledgement of debts to his mother to receive access to the collection. Linnaeus fil. took good care of the herbarium and also contributed to it with his own collections of plants, mainly from his journey in Europe.

The collection to London

After the decease of Linnaeus fil., the collections were sold to J. E. Smith in London for 900 guineas. Also, Linnaeus' library, his correspondence and manuscripts were sold. In Sweden, some attempts were made to keep the collections in the country, but neither the king nor the university chancellor was willing to contribute the money.

In 1784, the medical student Andreas Dahl offered to buy the collections. J. G. Acrel, whose task it was to sell the collections, claimed that Dahl did not offer the same price as J. E. Smith and therefore ignored Dahl's request. When Dahl, through the government, tried to stop the exportation it was already to late. The collections were already on their way to London.

During his year as a botanical demonstrator Linnaeus fil. described several species from the botanical garden in Uppsala in Decas I et II plantarum rariorum horti Upsaliensis (1762-63) and Plantarum rariorum Horti Upsaliensis fasciulus primus (1767). After the death of Linnaeus, Linnaeus fil. published his fathers' additions to Systema naturae and also his own taxonomic contributions in Supplementum plantarum 1781.