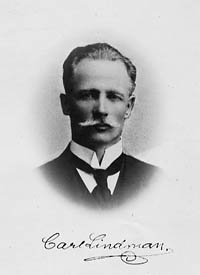 Carl Axel Magnus Lindman, son of Carl Christian Lindman and Sophie Fredrique Löhr, was born in Halmstad, on the 6th of April 1856.

The father died when Carl was only 1½ years old and his mother was left with Carl and his younger sister, who was born three months after their father's death.

The family moved to Växjö in 1864, where Carl went to primary school. He showed great musical and artistic talents but was advised by his mother not to make an artistic career.

He matriculated 1874 and became a student at Uppsala university the same year. His main subjects were Botany and Zoology. In 1884 Lindman became Associate Professor in Botany and two years later he was made a Doctor of Philosophy.

In the beginning of 1887, Lindman was employed as the Regnellian Amanuensis at the Swedish Museum of Natural History, during the summer he worked as an assistant in Bergius Botanic Garden and in September became a lecturer in Natural History and Physics at Högre Latinläroverket, a secondary school in Stockholm.

Lindman received, together with Gustaf Malme, the first Regnellian travel grant in 1892. After a journey to Brazil and Paraguay, Lindman returned to his position as lecturer.

Between 1896 and 1900 he was on leave of absence in order to teach the sons of the crown prince (who was later to become King Gustaf V). Among the herbarium botanical collections in alcohol, there is an orange with double rows of carpels "collected" (herbarium number A-1557) by the 15-year old prince Gustav Adolf (later King Gustav VI Adolf). Which probably ended up in the museum collections because of Lindman, who taught the princes at that time.

In 1905, Lindman was appointed Professor at the Botany Department at the Swedish Museum of Natural History. He held that position until his retirement in 1923. Carl Lindman died in his home, on the 21st of June 1928, at the age of 72.

As a student in Uppsala, Lindman soon became interested in fertilisation biology of flowers, a new area of research in the spririt of Darwin, who attracted many researchers in Uppsala at the time. Lindman published several articles in this subject, for example his thesis "Om postflorationen och dess betydelse såsom skyddsmedel för fruktanlaget" and a paper on the genus Silene, based on studies in the Bergius Garden. His numerous publications, both scientific and more popular, were often accompanied by illustrations by Lindman himself.

The work of Lindman that became most well-known to the public is "Bilder ur Nordens flora", which was first published in 1901-1905. Improvements of the copperplate engravings in Palmstruch's "Svensk botanik" made the base for the work, but for the second edition (1917), Lindman personally produced 144 new illustrations.

Lindman made several botanical journeys, for example to a number of the countries in Europe, but also to Africa (Tunisia and Algeria) and to South America (Brazil and Paraguay). Together with Gustaf Malme he collected in South America between 1892-1894, as the first holders of the Regnellian travel grant.

He returned with rich collections of plants and as a result of his studies of the vegetation in South America, published a considerable number of papers on ferns, grasses, sedges, legumes, bromeliads and other plant families. He discovered several undescribed plants, for instance one which he later on described as a new genus named Regnellidium, in the family Marseliaceae. In 1900, his great work "Vegetationen i Rio Grande do Sul" was published. 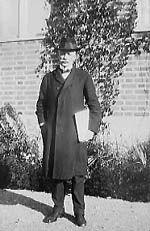 ​Professor at the Botany Department

Problems concerning plant biology continued to interest Lindman, but his research became more and more directed towards floristic and systematic studies. When the position as Professor at the Botany Department at the Swedish Museum of Natural History was created. Both Malme and Lindman with their systematic background applied, the position was given to Lindman.

Who as new professor had as one of his main challenges the planning and carrying through of the move of the botanical collections from Drottninggatan-Wallingatan in Stockholm City, where the museum had been located since 1831, to the new museum building in Frescati, completed 1914. As a former lecturer, Lindman pleaded for the importance of botanical exhibitions in teaching.

The Swedish parliament gave 8000 kronor, which in 1916 made it possible to start building the botanical exhibitions, which were kept open for the public until the early 1980s. The exhibitions were housed in the same building as the botanical collections.

As head of the Botany Department, Lindman mainly devoted his time to studies of the Scandinavian flora, for example studies of the genera Poa, Polygonum, Inula and Crataegus. Lindman was professor until his retirement in 1923 but stayed on until the new professor, Gunnar Samuelsson was appointed in 1924.

Lindman showed a great interest in the life and work of Carl Linnaeus. Among other things he arranged the collections that Linnaeus had worked with. His interest in Linnaeus also resulted in numerous publications, for example "Carl von Linné såsom botanist", which he was commissioned to write in 1907 for the celebration of the 200 year anniversary of Linnaeus' birth, 1707.

Lindman has one plant genus named after him, a plant in the Bromeliaceae called Lindmania Mez. Several species contain Lindman's name in the species epithet. 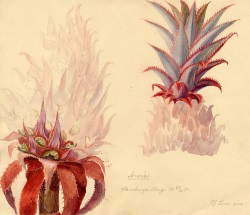 The Swedish Museum of Natural History keeps many of Lindman's water colour paintings, for example those that he made during his South American journey. A selection of these can be viewed in a gallery of his pictures.

Gallery with illustrations of C. A. M. Lindman
Example of Lindmans handwriting