The Swedish physiscian and botanist Anders Regnell was born in 1807 in Stockholm. His main intrest in life was botany and he lived a great part of his life in Brazils. 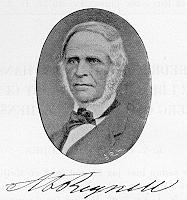 The Swedish physiscian and botanist Anders Regnell was born in 1807 in Stockholm as the son of the unmarried servant-woman Brita Persdotter and coachman Anders Ringnell.When the father married the widow of an Inn-keeper, the young boy moved in with them.

Although economically well off, the father and the step-mother were very busy tending to the public house, and no real family life was offered the boy. At the age of seventeen, Regnell passed his matriculation exam and started medical school.

His main interest in life was botany, which he was tought by his teacher in Uppsala, Göran Wahlenberg, who was "in cathedra Linnaeana tertius". Regnell graduated in 1837 and left Sweden for Brazil in 1840 because he suffered from weak health due to haemorrhage of the lungs.

Evidently, he recovered somewhat already during the voyage to South America, and after passing an exam at the Faculty of Medicine in Rio de Janeiro, he started off to the small village of Caldas in the province of Minas Geraes, 1200 meters above sea level, where he lived until his death in 1884.

Thanks to his solid education and clinical experience, Regnell soon had a lucrative practice. He acquired real estate and coffee plantations, and increased his fortune.

With inexhaustible eagerness, Regnell collected plants, and he expanded his house to create more room for his herbarium. Large parts of his collections were examined for Martius' Flora Brasiliensis.

Regnell was a recluse and a bachelor, but several people lived for long periods as his guest at Caldas. Many were visiting botanists who made large and important collections that were deposited in the Regnellian herbarium.

Apart for a large number of species, three genera have been named in his honour

Regnell planned a "Brazilian Institution" and the Swedish Museum of Natural History in Stockholm was intended as the location for this (now the Regnellian Herbarium). He procured financial means for a continuous curation of the collections and for making field trips to collect more material.

Regnells donations to botany is administered by the Royal Swedish Academy of Sciences, but he was also a benefactor of Uppsala University and Karolinska Institutet in Stockholm. His aim was to support biological and medical research.