At Cosmonova you can enjoy a great, immersive and stunning experience. You can feel what it is like to be on the scene, in the midst of an adventure. The Cosmonova theater is unique, as is its technology. 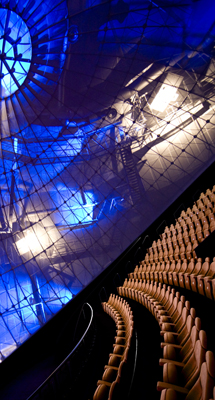 Visitors in wheelchair remain i the wheelchair during show, for security and to facilitate any
evacuatuin. Accessibility location in the theatre is pre-booked by phone:

Children of 10 years of age may visit Cosmonova unaccompanied. Children under the age of 10 must be accompanied by an adult over 18 years old.

Infants under the age of 2 are not allowed inside the
theatre. This is to ensure the safety of the little ones in the event of evacuation. Prams and strollers may not be brought inside the theatre. The stroller parking is located next to the entrance to Cosmonova, inside the museum.

Cosmonova's projection dome is 23 meters in diameter, and is made of perforated aluminum, with a total surface area of 760 m². The panels are perforated in order to let sound pass through the dome, and also are an essential part of the ventilation system for the theater.

The surface of the dome is finished with a special, electrostatically applied paint. The reflectivity of the screen is 35%.

The theater has 262 seats including three places for wheelchairs.

The backs of the seats are tilted at different angles depending on which row in the theater they located. The tilt varies in order to have the best visual experience regardless of where you sit.

Audio is provided via a six channel sound system, with a separate sub-bass system, that can cover a frequency range from 20 to 20,000 Hz. Total amplification for the system is 15,200 Watts, delivering up to 110 dB sound pressure levels.

The main sound source for the six channel system is a DDP-2 digital hard disk-based system.

IMAX® Dome (Formerly known as Omnimax®) utilizes the world's largest film format; 70mm, 15 perf. It is ten times larger than the 35mm film used in most movie theaters. The large film format adds a heightened dimension of brightness, realism and sharpness not found in smaller film formats. Employing a fisheye lens, the projector can cover an angle of 180° by 125°, allowing the audience to become a part of the action projected onto the dome overhead. 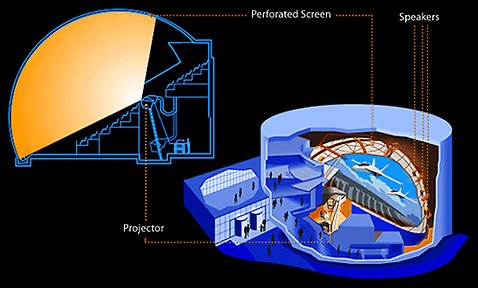