The project takes advantage of a unique opportunity to investigate the impact of a change in the location of a shipping lane, on the noise level in the area and the impact it has on porpoise behaviour and distribution. 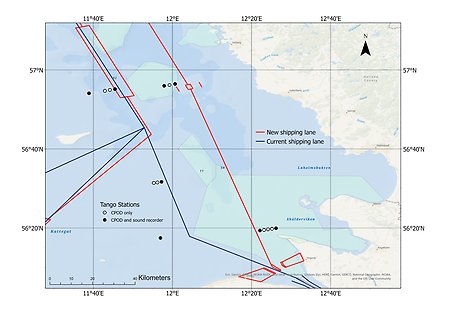 Underwater noise from shipping is a well-recognised threat to marine mammals, and it is the dominate source of anthropogenic noise in the world’s oceans. Ship noise has many possible impacts on marine mammals including disturbance of behaviour, changes in area use, masking of communication, as well as temporary or permanent hearing loss. However, it is often difficult to separate the impact of ship noise from other factors (such as habitat quality, climate change, or other forms of disturbance) to determine specifically how marine mammals are influenced by this threat.

During 2020, a major shipping lane in the Kattegat was re-routed in order to increase shipping safety. The “Rerouting shipping lanes in the Kattegat – effects on soundscape and ecosystem (TANGO)” project takes advantage of this unique opportunity to investigate the impact of a change in the location of a shipping lane, on the noise level in the area, as well as the impact it has on porpoise behaviour and distribution.

Data on noise and porpoise detections (using CPODs) were collected for one year prior to the shipping lane change, and for one year after the change. These two periods will be examined to determine how the shift in the location of the shipping lane (and subsequent change in noise levels) influenced harbour porpoises distribution and foraging behaviour. This may enable us to determine how much ship noise porpoises will tolerate, and to what extent important behaviours such as foraging may be influenced by the noise.

Data collection for this project finishes in June 2021, and the project is planned to be completed by the end of 2021.

The project are funded in Sweden by Trafikverket, the Swedish Agency for Marine and Water Management (HaV), and the Nordic Council.