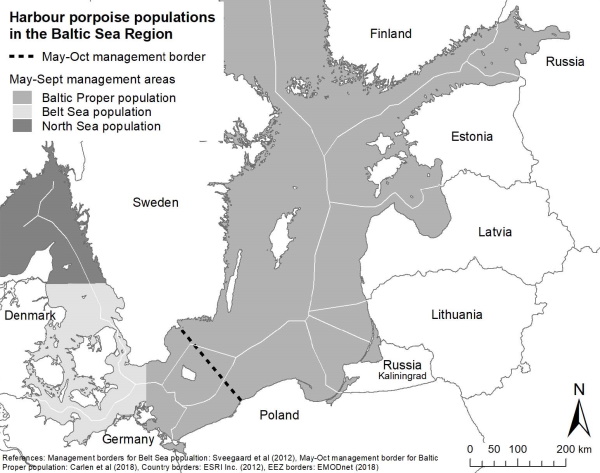 Map showing the management areas of the three harbour porpoise populations in Swedish waters, two of which (the Belt Sea population and the Baltic Proper population) are managed by HELCOM.

The aim of the project HELCOM biodiversity, litter, underwater noise and effective regional measures for the Baltic Sea (HELCOM BLUES) is to support regional capacity, coordination and cooperation concerning the development of effective measures to secure good status of the marine environment, in line with the EU Marine Strategy Framework Directive (MSFD).

The Swedish Museum of Natural History is involved in Activity 2 on Biodiversity, specifically within task 2.4 on Harbour porpoises. This task aims to harmonise the development of harbour porpoise indicators between HELCOM and OSPAR, assess trends in the abundance of the Belt Sea population, and carry out a qualitative assessment of the abundance and distribution of the Baltic Proper population.

As the Belt Sea population of harbour porpoises is required to be assessed within both the HELCOM and OSPAR regions, a harmonised approach will make it easier for Member States to complete their assessments to the EU. A workshop took place in April 2021 between the HELCOM Expert Group on Marine Mammals

The results from this workshop are used to complete a trend analysis in the abundance of the Belt Sea population using data from the SCANS (1994, 2005, and 2016) and Mini-SCANS surveys (2012 and 2020). The outcome of the analyses will be used in HELCOM’s Third Holistic Assessment of the Ecosystem Health of the Baltic Sea

As well as the Belt Sea population, the Critically Endangered Baltic Proper population is also within the HELCOM region. However, there are insufficient data available to progress with indicator development for this population, and consequently, a qualitative assessment will be carried out based on a literature review comparing the current status of the population to historic accounts of abundance and distribution. The outcome of the qualitative assessment will also be used within HOLAS III.

Task 2.4 on Harbour porpoise is completed in collaboration with University of Veterinary Medicine Hannover